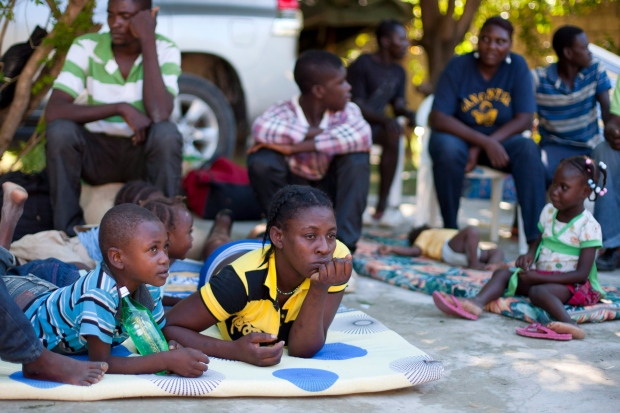 Haitian Jeanne Dorissaint, 26, rests with her children who were born in the Dominican Republic, at a shelter after they were deported by Dominican Republic authorities, in Croix-des-Bouquets, Haiti, Monday, Nov. 25, 2013. (AP /Dieu Nalio Chery)

The plan states that those affected by the ruling have 18 months to request Dominican citizenship starting in June 2014. The plan, however, does not provide details on what kind of requirements or conditions should be met.

President Danilo Medina signed the plan days before the Inter-American Court of Human Rights holds a five-day hearing to receive complaints and testimony from those affected by the ruling.

The ruling states that those born in the Dominican Republic since 1929 to foreigners living illegally in the country are not automatically granted citizenship.

Human rights groups have decried the plan and the ruling, saying that an estimated 200,000 people could lose their citizenship, the majority of those of Haitian descent. The government maintains that only some 24,000 would be affected.

The plan is contradictory, because it seeks to naturalize people who were already born in the Dominican Republic and do not have passports from another country, according to Joseph Cherubin, director of the local non-profit Sociocultural Movement for Haitian Workers.

"To naturalize someone, they need to have a foreign passport," he said. "You can't naturalize a Dominican."

The plan is being launched as 464 people have either been deported to Haiti or left the Dominican Republic voluntarily in the past week due to anti-Haitian sentiments following the murder of an elderly Dominican couple.

Dominican and Haitian officials were scheduled to discuss the court ruling on Saturday, but the Dominican government cancelled the meeting after the Caribbean Community criticized the ruling and said it would defer a Dominican request to become a member of the trade bloc.