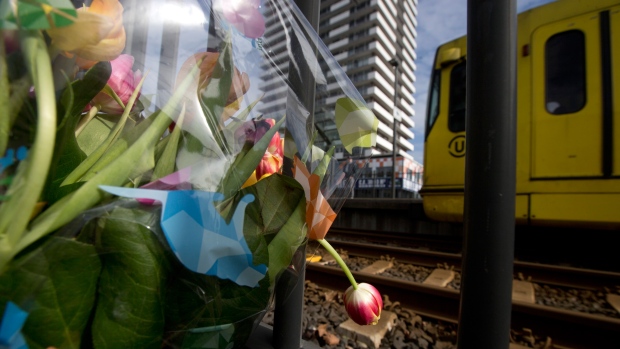 A tram passes flowers at the site of a shooting incident in a tram in Utrecht, Netherlands, Tuesday, March 19, 2019. A gunman killed three people and wounded others on a tram in the central Dutch city of Utrecht Monday March 18, 2019. (AP Photo/Peter Dejong)

UTRECHT, Netherlands -- Dutch investigators probing the deadly tram shooting in the city of Utrecht sharpened their focus Tuesday on a possible extremist motive, as judicial authorities revealed that the main suspect was released from jail this month and faces a rape trial in July.

The nature of the Monday's attack and a note found in a suspected getaway car suggest a possible terror motive, prosecutors said in a statement, but they add that other possible reasons also are being investigated.

"Based on the letter, we think he had a terroristic motive," police spokesman Joost Lanshage told The Associated Press. He declined to elaborate.

Prosecutors also said that investigations so far have not established any relationship at all between the main suspect, Gokmen Tanis, and the shooting victims.

Three people died: a 19-year-old woman from the neighbouring town of Vianen, and two men aged 28 and 49 from Utrecht.

Three others were seriously wounded and four more suffered minor injuries, according to prosecutors.

Throughout the day, well-wishers placed flowers at the foot of a tree next to the intersection where the shooting happened. At the end of the afternoon, Prime Minister Mark Rutte and Justice Minister Ferd Grapperhaus also laid bouquets and briefly talked to police officers at the scene.

Tanis, a 37-year-old man of Turkish descent, was being held on suspicion of "manslaughter with terrorist intent."

He was arrested Monday evening after an hours-long manhunt that nearly paralyzed the Netherlands' fourth-largest city and sent shockwaves through the nation. Police recovered a weapon when they arrested him.

In an unusual step, judicial authorities released details of Tanis' criminal past, and said he was released from jail on March 1 and faces trial in July on a rape charge. A court had approved his release after he pledged to co-operate with authorities.

In the past, he was acquitted of manslaughter but convicted of illegal possession of a weapon and theft.

Wilders called on Justice Minister Ferd Grapperhaus to resign, saying that Tanis shouldn't have been released from jail.

"You are politically responsible for this," Wilders said during a parliamentary debate. "You have to resign, get out of here."

The tram shootings came just days after 50 people were killed when an immigrant-hating Australian white supremacist opened fire in two mosques in Christchurch, New Zealand, during Friday prayers. There was no indication of any link between the two events.

In a ceremonial session in parliament, Rutte said that because of the attack in Utrecht, "we feel an even stronger bond with the people of Christchurch."

The Netherlands hasn't been hit by the kind of large-scale extremist attacks seen in recent years in other European countries like France, Belgium and Britain.

Rutte said the shooting "was not a bad dream but the hard reality with which we woke up."

Dutch and Turkish media citing his neighbours in Utrecht have speculated that the shooting may have been linked to a relationship, but that appears increasingly unlikely after prosecutors said none of the victims were known to the main suspect.

Dutch media published details of two of the victims killed Monday -- the 19-year-old woman reportedly worked in a cafe in Vianen, and a father-of-three who volunteered as a soccer coach in Vleuten, a town west of Utrecht.

A phone call from The Associated Press to the cafe Tuesday morning went unanswered.

The soccer club posted a message saying they heard "with great dismay and astonishment" that the trainer of an under-19 boys' team and under-11 girls' team died in the shooting.

Dutch railroad infrastructure company ProRail confirmed that one of its employees was among the dead.

"The terrible events of yesterday and the loss of our colleague have hit us hard," CEO Pier Eringa said in a statement.