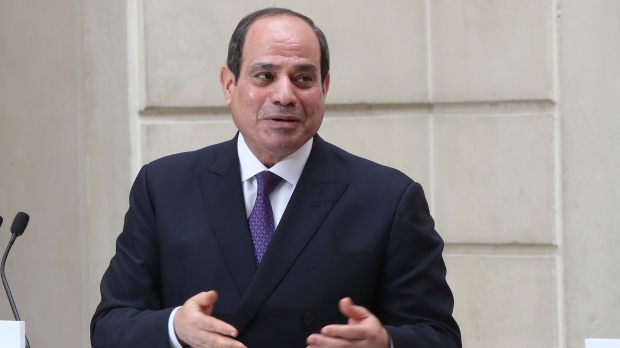 FILE - In this Dec. 7, 2020, file photo, Egyptian President Abdel Fattah el-Sissi speaks during a joint press conference with French President Emmanuel Macron at the Elysee palace in Paris. Egypt’s president arrived in Sudan on Saturday, March 6, 2021, his first visit to the country since a popular uprising led to the military’s overthrow of longtime autocrat Omar al-Bashir in 2019.(AP Photo/Michel Euler, File)

CAIRO - Egypt's president visited Sudan on Saturday, his first visit to the country since a popular uprising led to the military's overthrow of longtime autocrat Omar al-Bashir in 2019.

President Abdel Fattah el-Sissi landed at Khartoum international airport and headed to a meeting with Gen. Abdel Fattah Burhan, head of the ruling Sovereign Council, at the presidential palace. There, they inspected a military guard of honour. El-Sissi also met with Prime Minister Abdalla Hamdok, and Gen. Mohammed Hamdan Dagal, deputy head of the sovereign council.

“This visit comes within the framework of close co-operation between the two nations,” Burhan told a news conference with el-Sissi. “We discussed all the files that support mutual co-operation.”

The Egyptian leader discussed with Sudanese officials an array of issues, including economic and military ties and the two nations' dispute with Ethiopia over a massive dam it is building on the Blue Nile, Egypt's presidency said.

El-Sissi also discussed Sudan's border dispute with Ethiopia and security in the Red Sea region, which has become a theatre of growing competition among world and regional powers in recent years, the statement said. Both Sudan and Egypt are members of a newly established Red Sea forum, along with six other African and Asian nations.

The visit came amid a rapprochement between the two governments. Egypt has in recent years sought to rebuild ties with its southern neighbour, an effort that has intensified since al-Bashir's ouster in April 2019. Top civilian and military officials from both nations have exchanged regular visits. The countries signed an agreement last week to strengthen their military co-operation.

“We have been facing common regional threats, and we have to work together to face these threats on all fronts,” Egypt's Chief of Staff Mohamed Farid said while visiting Khartoum last week.

During al-Bashir's era, relations between Sudan and Egypt suffered from sporadic tensions. These included the revival of a longstanding dispute over a border territory, the Halayeb Triangle, which is held by Egypt and claimed by Sudan.

Despite decade-long negotiations, the two countries have repeatedly failed to reach a three-party deal with Ethiopia over its massive dam.

Cairo and Khartoum have recently called for internationalizing the dispute to include the U.S., the European Union, the U.N. and the African Union to facilitate reaching a deal on the filling and operation of the Grand Ethiopia Renaissance Dam.

In a phone call Friday with Egypt's Foreign Minister Sameh Shukry, U.N. Secretary-General Antonio Guterres said the world body was ready to “support and participate” in AU-led negotiations to resolve the dam dispute.

Sudan has criticized Ethiopia's plans to start a second filling of the dam's massive reservoir during the next rainy season. At least 20 million Sudanese, more than half the country's population, could be affected if Ethiopia fills and operates the dam without co-ordinating with Sudan, the government in Khartoum has said. Sudanese could suffer both from flooding and less access to drinking water because Sudan's own dams would be affected, it says.

El-Sissi said that Egypt and Sudan have agreed on the importance of relaunching “serious and effective” negotiations that aim at achieving a “fair, balanced and legally binding” agreement on the dam's filling and operating.

Egypt and Sudan also reject attempts by Ethiopia to “impose a fait accompli and control the Blue Nile through unilateral measures that do not take into account the interests and rights of the two downstream countries,” he said.

Sudan wants Ethiopia to co-ordinate and share data on the dam's operation to avoid flooding and protect its own power-generating dams on the Blue Nile, the main tributary of the Nile River. The Blue Nile meets with the White Nile in central Sudan. From there, the Nile winds northward through Egypt and flows into the Mediterranean Sea.

Egypt, the Arab world's most populous country with over 100 million people, has called the dam an existential threat and worries that it would reduce its share of Nile waters. The country relies almost entirely on the Nile to supply water for agriculture and its people.

About 85% of the Nile's flow originates from Ethiopia. Ethiopian officials hope the dam, now more than three-quarters complete, will reach full power-generating capacity in 2023, helping pull millions of its people out of poverty.