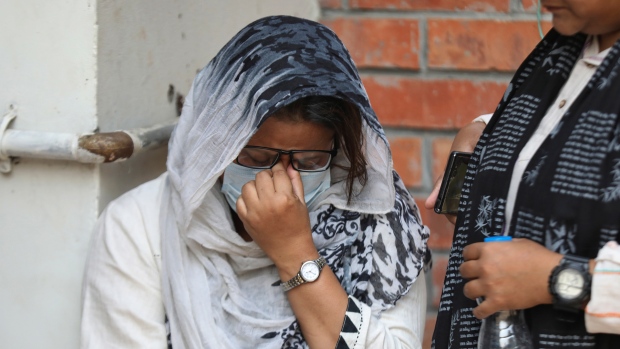 Razia Rahman, wife of Faisal Arefin Deepan, breaks down after hearing the court verdict on the killing of her husband in Dhaka, Bangladesh, Wednesday, Feb.10, 2021 . A special tribunal in Bangladesh’s capital on Wednesday sentenced to death eight Islamic militants tied to a banned group for the 2015 killing of Deepan, a publisher of books on secularism and atheism. (AP Photo/Mahmud Hossain Opu)

DHAKA, Bangladesh -- A special tribunal in Bangladesh's capital on Wednesday sentenced to death eight Islamic militants for the 2015 killing of a publisher of books on secularism and atheism.

The judge had earlier issued arrest warrants for them. The prosecution said they belonged to the banned militant outfit Ansar al Islam.

In October 2015, suspected militants hacked to death Faisal Abedin Deepan of the Jagriti Prokashoni publishing house in a market near the Dhaka University. On the same day, another publisher, Ahmed Rashid Tutul, survived a near simultaneous attack also in Dhaka.

Both victims were publishers of Bangladeshi-American writer and blogger Avijit Roy, who also was hacked to death in February 2015 when he was returning from an annual book fair in Dhaka.

The judge said prosecutors were able to prove the charges against all the eight accused. He said they acted against free thinkers with a larger aim to destabilize the country.

Razia Rahman, Deepan's wife, expressed satisfaction with the verdict. The defence said they would appeal.

Tutul, who was severely wounded, flew to Nepal and ended up taking asylum in Norway with his family.

“Yes, I just heard the news of the verdict. I wish we will one day come to know who is this former army officer Zia. Why he masterminded the attack and how he was patronized,” Tutul told The Associated Press in a message from Norway. “I think Bangladesh will seriously deal with the radical forces and get rid of them.”

In 2015, several atheists, bloggers and foreigners were killed by suspected militants. A Dhaka bomb attack on Oct. 24, 2015, aimed at minority Shiite Muslims killed a teenager and injured more than 100 people.

Authorities say the broke the network of militants in a massive crackdown following a 2016 attack on a cafe in Dhaka in which 22 people, including 17 foreigners, died together with five assailants.

The Islamic State group had claimed responsibility for that and other attacks, but Bangladesh's government said that domestic groups were behind them and insisted that IS has no presence in the country.