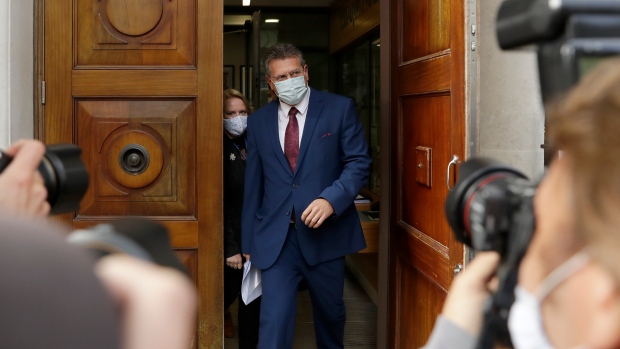 European Commission Vice President Maros Sefcovic is watched by photographers as he leaves the Europa house in London, Thursday, Sept. 10, 2020. UK and EU officials have their eighth round of Brexit negotiations in London. (AP Photo/Matt Dunham)

BRUSSELS -- European Union ministers on Tuesday discussed ways to better co-ordinate travel restrictions in the 27-nation bloc and guarantee the smooth circulation of people and goods as many EU nations see a resurgence of the coronavirus.

European affairs ministers gathered in Brussels hoped to define a common ground following the confusion that individual border restrictions some countries adopted during the early days of the pandemic. In March, several member nations closed their borders in an attempt to stop the spread of the virus, even though the EU's Schengen agreement allows residents to move freely between countries without visas.

The actions blocked traffic and medical equipment. The European affairs ministers are discussing recommendations the EU's executive commission made to avoid a repeat of the situation.

"What is very important from the point of view of the commission is to return as soon as possible to a normal functioning of the single market, to remove all the barriers that have been created during the COVID crisis, and also give assurances to our citizens that we will very soon be getting things back to normal," Maros Sefcovic, a European Commission vice-president attending the discussion, said.

Several EU countries dealing with a second wave of confirmed virus cases have imposing localized lockdowns and restrictions on public and private gatherings. The European Commission has proposed that member countries agree on common criteria and thresholds for putting travel restrictions in place.

It also proposed colour-coded risk categories - green, orange, red and grey. Those arriving from an area classified as red or grey, for example, would be required to "either undergo quarantine or undergo a COVID-19 test after arrival -- COVID-19 testing being the preferred option."

The meeting in Brussels was the ministers first to be held in person since February.

Meanwhile, the European Commission said it increased its stockpile of protective medical equipment and supplies to be in a position to support EU members if outbreaks in Europe worsen in the coming months. The EU was caught unprepared earlier this year when Italy ran out of masks and other countries could not immediately answer the country's request for assistance because of a worldwide shortage.

"With winter approaching and coronavirus cases increasing throughout Europe, it is crucial that we continue to build up our stocks," European Commissioner for Crisis Management Janez Lenarcic said.