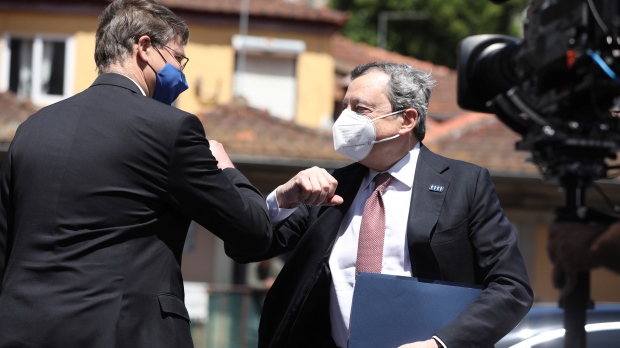 Italy's Prime Minister Mario Draghi, right, elbow bumps European Commissioner for An Economy that Works for People Valdis Dombrovskis as he arrives for an EU summit at the Alfandega do Porto Congress Center in Porto, Portugal, Friday, May 7, 2021. (Jose Coelho, Pool via AP)

But the growth lagged pre-pandemic levels and trailed the faster recoveries in the U.S. and China, with the delta variant continuing to cast a shadow of uncertainty over the upturn.

Gross domestic product grew 2.0% in the April-June quarter over the quarter before, official figures from the European Union's statistics agency Eurostat showed. That compared to a drop of 0.3% in the first quarter as the 19 countries that use the euro endured a double-dip recession.

The growth figure was stronger than the 1.5% foreseen by market analysts.

Growth returned in major economies France, which grew 0.9% compared to the previous quarter, and Germany, which saw growth of 1.5% after a sharp drop of 2.1% in the first quarter.

The recovery lags the one in the U.S., where the economy surpassed its pre-pandemic level during the quarter. Friday's figures leave the eurozone well below that level. China was the only major economy to continue growing during pandemic year 2020.

Lagging vaccinations held back the European economy in the first part of the year but have made steady progress since. Yet the spread of the more-contagious delta variant has led to predictions that it may slow, though not derail, the economic upturn.