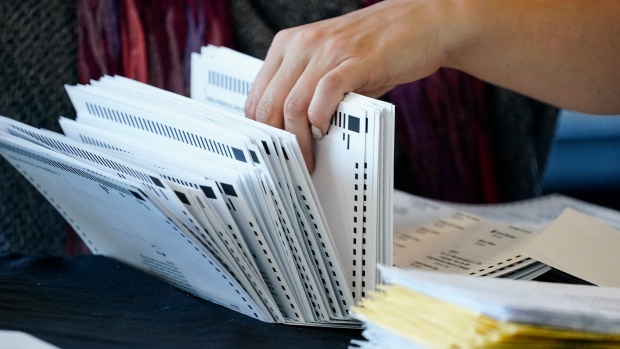 WASHINGTON -- Thousands of still-uncounted ballots -- many in counties where Democrat Joe Biden was in the lead -- are what's making the Georgia contest between President Donald Trump and Biden too early to call.

Trump and Biden were locked in a tight contest Friday to secure the 270 electoral votes needed to win the presidency. Georgia is a must-win state for Trump, who has a narrower path to victory than Biden.

Trump prematurely declared he was winning it early Wednesday morning. Yet by early Friday, Biden had overtaken him by more than 900 votes.

The secretary of state's office said Thursday that 18,936 absentee ballots still needed to be counted in seven counties.

That did not include provisional ballots and absentee ballots that have to be "cured" before being scanned. Ballots cast before Election Day by military voters and citizens living overseas and received by 5 p.m. Friday also will be tallied.

Additionally, Biden's vote margins grew after a handful of rural pro-Trump counties processed mail ballots cast in his favour, an analysis by the AP showed.

There is a potential that the race could go to a recount. Under Georgia law, if the margin between Biden and Trump is under half a percentage point, a recount can be requested.

Georgia has long been a Republican stronghold. Voters there haven't swung for a Democratic presidential candidate since Bill Clinton in 1992. Trump beat Hillary Clinton there by 5 percentage points in 2016. And the state's government is dominated by the GOP.

But the party's grip has loosened. As older, white, Republican-leaning voters die, they are being replaced by a younger and more racially diverse cast of people, many of whom moved to the booming Atlanta area from other states -- and took their politics with them.

Overall, demographic trends show that the state's electorate is becoming younger and more diverse each year. Like other metro areas, Atlanta's suburbs have also moved away from Republicans. In 2016, Hillary Clinton flipped both Cobb and Gwinnett counties, where Biden is currently leading.

In 2018, Democrat Stacey Abrams galvanized Black voters in her bid to become the country's first African American woman to lead a state, a campaign she narrowly lost.

Many political analysts say it's not a question of if but rather when Georgia becomes a swing state.

That much was clear in the closing weeks of the campaign as Biden; his running mate, Sen. Kamala Harris; and former President Barack Obama barnstormed the state. Trump, too, visited the state to play defence.