Fauci sees vaccination for kids by late spring or the summer 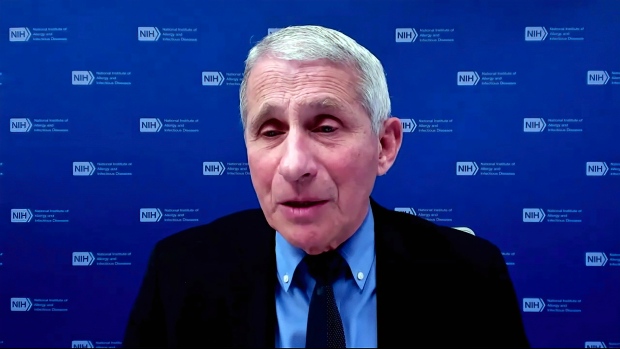 In this image from video, Dr. Anthony Fauci, director of the National Institute of Allergy and Infectious Diseases and chief medical adviser to the president, speaks during a White House briefing on the Biden administration's response to the COVID-19 pandemic Wednesday, Jan. 27, 2021, in Washington. (White House via AP)

WASHINGTON - The government's top infectious disease expert said Friday he hopes to see children being vaccinated starting in the next few months. It's a needed step to securing widespread immunity to the coronavirus.

“Hopefully by the time we get to the late spring and early summer we will have children being able to be vaccinated,” Dr. Anthony Fauci said during the White House coronavirus briefing.

Vaccines are not yet approved for children, and Fauci was looking ahead to a time they will be plentiful. Even older adults are having difficulty getting shots at the moment. As of Thursday, only about 1.3% of Americans had been fully vaccinated with the required two doses of the currently available vaccines.

“Children tend to not become as severely ill as adults but they can still become ill and some have tragically died,” said Dr. Leana Wen, a public health expert and emergency room physician, who supports Fauci's goal. “Children can also be vectors of transmission, and getting children vaccinated is important as we strive for herd immunity.”

The Food and Drug Administration has not yet approved vaccines for children, due to insufficient testing data on safety and effectiveness for young people. But Fauci said data is being gathered now, through a process called “age de-escalation testing.”

For example, the Pfizer-BioNTech vaccine received emergency approval for use in people 16 and older. The next step, said Fauci, involves testing in children down to 12 years old, and if that's successful it's followed by another round of testing down to those 9 years old.

Since the initial tests to validate the safety and effectiveness of the Pfizer and Moderna vaccines involved tens of thousands of people, the age-related testing on children can be done using smaller groups.

“You don't want to have to ... go through an efficacy trial, where you're involving tens of thousands of children,” said Fauci. “What you can do, is in a much smaller trial, measured in hundreds to a couple of thousands ... what we call safety and ... immunogenicity.” That's a term for whether the vaccine successfully triggers an immune system response.

After a frustratingly slow start, the U.S. is now administering about 1 million shots a day to adults, although that pace is still seen as insufficient. President Joe Biden has talked about 1.5 million shots a day, if it can be done. His administration has set a goal of 100 million shots in its first 100 days.

Two more vaccines from American companies are nearing the stage where the FDA can evaluate them for approval. One from Johnson & Johnson requires only a single shot.

Biden has also set a goal of reopening most schools by the summer, and directed government agencies to work with communities to advance it.

His American Rescue Plan legislation in Congress calls for $50 billion to finance a major expansion of testing, which is seen as necessary for the safe reopening of schools and businesses. That's because robust testing can detect early outbreaks before they spread through a community and trigger shutdowns. Testing in the U.S. had a chaotic start, and experts say in many parts of the country it's still subpar.