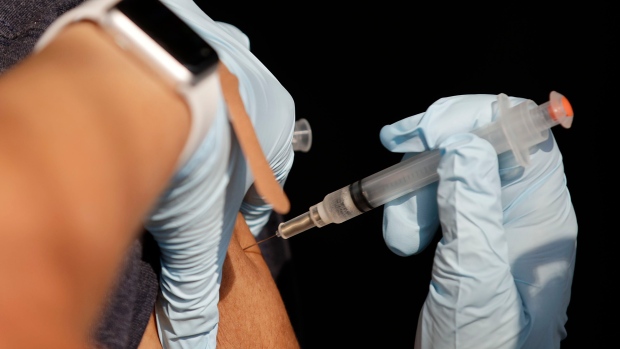 Registered Nurse Sarah Reinke with Indian Health Care Resource Center of Tulsa administers a Johnson & Johnson's Janssen COVID-19 vaccine at Iron Gate Wednesday, Aug. 4, 2021 in Tulsa, Okla. Vaccines were offered to clients as they lined up for a meal in the morning. (Mike Simons/Tulsa World via AP)

WASHINGTON (AP) - U.S. health advisers endorsed a booster of Johnson & Johnson's COVID-19 vaccine Friday, citing concern that Americans who got the single-dose shot aren't as protected as those given two-dose brands.

J&J told the Food and Drug Administration that an extra dose adds important protection as early as two months after initial vaccination - but that it might work better if people wait until six months later. Unable to settle the best timing, the FDA's advisory panel voted unanimously that the booster should be offered at least two months after people got their earlier shot.

“I think this frankly was always a two-dose vaccine,” said FDA adviser Dr. Paul Offit of Children's Hospital of Philadelphia. “It would be hard to recommend this as a single-dose vaccine at this point.”

The FDA isn't bound by the recommendation as it makes a final decision - and adding to the debate's complexity, new research also suggests that J&J recipients might have a stronger immune response if their booster dose is from a competing brand.

Preliminary results from an ongoing study of different ways to “mix and match” different shots showed that a booster of any sort revved up people's levels of virus-fighting antibodies - at least for a few weeks. And the most dramatic jump came from giving a Pfizer or Moderna shot after the single-dose J&J vaccination.

FDA's advisers didn't vote on whether that should be recommended but told the government to allow flexibility with boosters, saying there were no safety red flags even if it's not yet clear just how much difference, if any, mixing and matching may make in long-term protection.

“In the real world all these kind of combinations are already happening so I think it's a matter of some urgency for the FDA to help sort out what is admittedly a complicated and challenging scenario,” said Dr. Ofer Levy of Boston Children's Hospital.

The government says all three U.S. vaccines continue to offer strong protection against hospitalization and death from COVID-19, and that the priority is getting first shots to the 66 million eligible but unvaccinated Americans who are most at risk. But with the spread of the extra-contagious delta variant and signs of waning immunity against milder infections, the nation is moving toward a broader booster campaign.

Last month Pfizer boosters started being offered to seniors and younger adults at high risk from COVID-19 because of poor health, jobs or living conditions - at least six months after their initial vaccination. Thursday, the FDA advisory panel recommended the same approach for half-dose Moderna boosters.

But J&J's vaccine has consistently shown lower effectiveness levels across a series of studies - and the FDA panel ultimately settled on another shot for any recipient 18 or older at least two months after their first vaccination.

“This is really -- with the second dose -- bringing it, I think, on par with those other vaccines in terms of effectiveness,” said Dr. Archana Chatterjee of Rosalind Franklin University.

The FDA will use its advisers' recommendations to decide whether to authorize boosters for both J&J and Moderna. Next, the Centers for Disease Control and Prevention would rule on who should roll up their sleeves.

The vast majority of the 188 million Americans who are fully vaccinated against COVID-19 have received the Pfizer or Moderna options, while J&J recipients account for only about 15 million.

J&J's vaccine is made with a different technology and on Friday, the company pitched its booster as a way to strengthen a robust vaccine that they said has retained its protective power over eight months. But FDA scientists pointedly challenged that assertion.

“There are data that suggest the effectiveness of this vaccine is actually less robust than the company's presentation here,” said Dr. Peter Marks, FDA's top vaccines official. “And that is a finding of concern particularly because that's been seen in minority communities potentially and others.”

As for its booster, J&J presented results from a large study that found giving a second dose just two months after the first bumped protection against symptomatic COVID-19 to 94% from 70% in U.S. recipients. Giving that booster six months later instead prompted an even bigger jump in virus-fighting antibodies.

But in their own review, FDA scientists noted only a tiny portion of cases involved the delta variant, by far the dominant strain in the U.S. And while FDA's reviewers found no new safety concerns about a second J&J dose, they noted other shortcomings. J&J followed booster recipients for little more than a month, making it hard to draw conclusions about the durability of protection. Also, FDA scientists stressed they hadn't had time to independently confirm J&J's data, which were submitted shortly before the meeting. That's highly unusual and drew serious concern from the advisory panel.

The J&J vaccine was highly anticipated for its one-and-done formulation. But its rollout earlier this year was hurt by a series of troubles including manufacturing problems and some rare but serious side effects including a blood clot disorder and a neurological reaction called Guillain-Barre syndrome. In both cases, regulators decided the shot's benefits outweighed those risks.