Federal arraignment in July for 3 ex-cops in Floyd's death 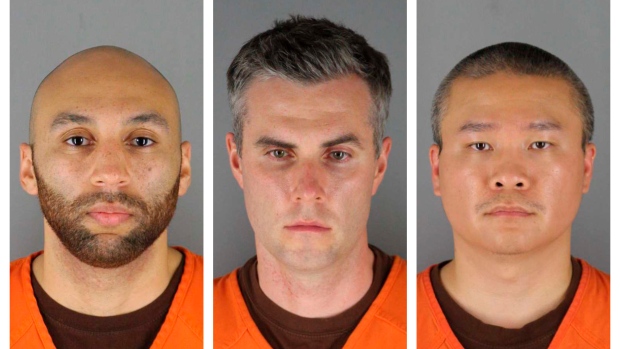 MINNEAPOLIS (AP) - Three former Minneapolis police officers who are charged with violating George Floyd' s civil rights are scheduled to be arraigned in federal court in July, with a trial date to be determined.

Thomas Lane, J. Kueng and Tou Thao will be arraigned on civil rights violations on July 14 in U.S. District Court in Minneapolis, according to a scheduling order issued Friday. The court initially said the trial would be in August, but updated the schedule hours later to say it was still unscheduled.

Last week, a federal grand jury indicted the former officers, along with their colleague Derek Chauvin, for allegedly willfully violating Floyd's rights. Chauvin has already been convicted of state murder and manslaughter charges and is awaiting sentencing. It wasn't immediately clear why he is not a part of Friday's scheduling order, but he has not yet made an initial appearance on the federal charges.

Messages left with Chauvin's attorney and with a spokeswoman for the U.S. Attorney's Office weren't immediately returned.

Floyd, 46, died after Chauvin pinned him to the ground with a knee on his neck, even as Floyd, who was handcuffed, repeatedly said he couldn't breathe. Kueng and Lane also helped restrain Floyd - state prosecutors have said Kueng knelt on Floyd's back and Lane held down Floyd's legs. Thao held back bystanders and kept them from intervening during the 9 1/2-minute restraint.

Chauvin was also charged in a second indictment, stemming from the use of force and neck restraint of a 14-year-old boy in 2017.

Lane, Kueng and Thao are also charged on state charges of aiding and abetting both murder and manslaughter. They are scheduled to face trial on those charges next March.

Correction - May 14, 2021: This story has been updated to correct the date of the trial, after the court posted an amended notice saying the trial date is to be determined.