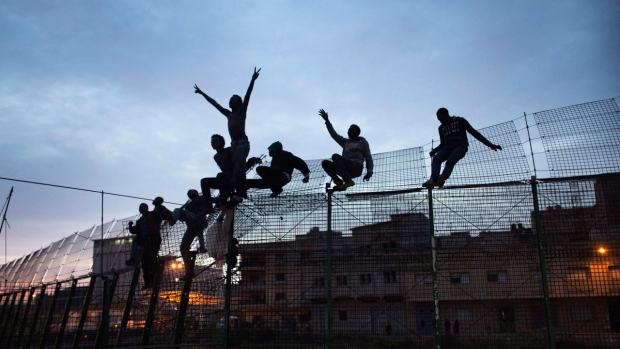 In this Friday, March 28, 2014, file photo, Sub-Saharan migrants climb over a metallic fence that divides Morocco and the Spanish enclave of Melilla. Since the early 1990s, Spain has built six-meter (20-foot) layered border fences around its two North African enclaves, Ceuta and Melilla, to help dissuade migrants, now mostly from sub-Saharan countries, from entering the cities from Morocco in the hope of reaching a better a life in Europe. (AP Photo/Santi Palacios, File)

MADRID -- Authorities in Melilla, one of Spain's two enclaves in North Africa, said Friday that around 200 migrants tried to climb a security fence separating the city from Morocco.

The local office of the Spanish government's representative said about 50 of the migrants managed to scale the barrier surrounding the coastal city, while the other 150 were repelled by Spanish and Moroccan border guards.

The migrants who reached Spanish soil were taken to a holding centre, where they can ask for asylum while authorities start procedures to return them to their countries of origin.

In May, 52 migrants got over the Melilla fence in another attempt.

Spain's Interior Ministry says 2,397 migrants reached Melilla over land between Jan. 1 and July 15. That is down from 2,554 during the same period last year.

Spain became the leading entry point for migrants to Europe in 2018. The European Union's border agency says about 57,000 unauthorized crossings were detected in Spain, double the figure for 2017, while overall in Europe they reached a five-year low. This week, it said that 14,667 people have arrived in Spain without authorization since the beginning of the year, compared to 19,997 during the same period in 2018.

Most risk their lives crossing the Mediterranean Sea in small boats unsuited for open water.