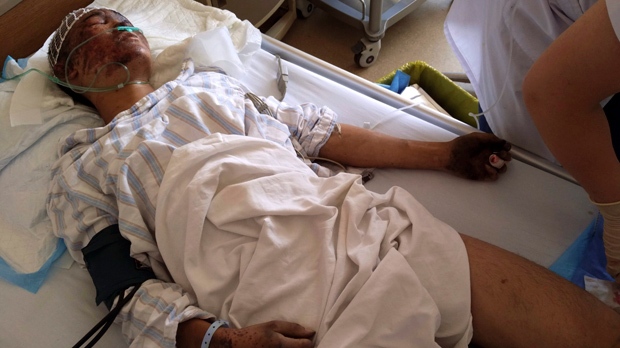 Chinese firefighter Zhou Ti is treated in Taida Hospital in north China's Tianjin municipality Friday, Aug. 14, 2015. Rescuers pulled Zhou from an industrial zone about 32 hours after it was devastated by huge blasts in China’s Tianjin port. Meanwhile, authorities are moving gingerly forward in dealing with a fire still smoldering amid potentially dangerous chemicals. (Chinatopix Via AP)

TIANJIN, China -- Rescuers pulled out a firefighter who was trapped for 32 hours after responding to a fire and huge explosions in the Chinese port city of Tianjin as authorities dealt Friday with a fire still smouldering amid potentially dangerous chemicals.

A rapid succession of explosions late Wednesday -- one equal to 21 tons of TNT -- killed at least 56 people, injured more than 720 and left several firefighters missing.

They were sparked by a fire at what authorities said were shipping containers containing hazardous material at a warehouse, and they struck a mostly industrial zone late at night -- otherwise the death toll could have been much higher. But the warehouse was close enough to residences to appear out of compliance with safety regulations, raising questions about whether the facility had properly been authorized.

The toll included at least 21 firefighters among the more than 1,000 sent to the disaster. Firefighters initially responded to a fire at the warehouse and many of them apparently were killed by a series of explosions triggered 40 minutes after the fire was reported.

"Reinforcements had just arrived on the scene and were just getting to work when the explosions occurred and therefore there was no chance to escape, and that's why the casualties were so severe," Tianjin Fire Department head Zhou Tian said at a news conference Friday. "We're now doing all we can to rescue the missing."

One firefighter was pulled from the zone at about dawn Friday and taken to a hospital, where he was being treated for face, chest and foot injuries, state broadcaster CCTV reported.

It was a bright moment in a day otherwise clouded by mistrust and unanswered questions. Local officials have been hard-pressed to explain why authorities permitted hazardous goods warehouses so close to residential complexes and critical infrastructure. They also have been publicly reticent about suspicions that firefighters may have sparked the explosions by spraying water on volatile chemicals.

Hazardous chemical warehouses must be at least 1,000 metres (3,300 feet) away from public buildings, highways, railways and industrial enterprises under regulations enacted by China's State Administration of Work Safety in 2001.

But Google Earth shows that Ruihai's two hazmat warehouses are less than 500 metres from the S11 Haibin Expressway, and within 500 metres of a 104,438-square meter (1.1 million-square foot) apartment complex built by China Vanke Co., one of China's largest developers.

Vanke said it acquired the land before Ruihai Logistics began loading toxic substances in its warehouses one block away. "The land was near normal logistics warehouses when we acquired it in April 2010," the company said in an emailed statement. "We were not aware they were later transformed into warehouses for hazardous material."

The housing development's windows were shattered and the side facing the explosions singed. The entire complex was evacuated and falls within a 1- to 2-kilometre zone around the blast site that has been cordoned off by police.

Local officials have publicly reassured a skeptical public that the blasts have not contaminated the air, but many residents weren't taking chances and could be seen Friday wearing air-filtering masks. "I don't usually wear a mask but I don't quite trust what the government says," Ma Wiehan said from behind her mask as she walked with her 6-month-old daughter. "I'm doing this for my child."

Questions about whether firefighters may have sparked the blasts have been circulating in the Chinese media. One report suggested that water used by first responders may have come into contact with a chemical that explodes on contact with water, but an official also is quoted as saying the first wave of firefighters could not have sparked the blasts.

Many of the fire trucks seen at the site hours after the blasts use a kind of firefighting foam.

Authorities have not said what caused the explosions, saying only that they originated at the warehouse owned by Ruihai International Logistics. Its website says the company is authorized to handle chemicals ranging from flammable gases and liquids, including compressed natural gas and ethyl acetate, to chemicals that explode on contact with water, including sodium cyanide and calcium carbide.

However, the warehouse was a transit point and authorities have no clear picture of what was there at the time of the blasts. Records at the site were destroyed in the disaster, meaning that authorities must rely on customs documents, said Gao Huaiyou, deputy director of occupational safety in Tianjin.

City officials so far have confirmed only that calcium carbide, potassium nitrate and sodium nitrate were at the warehouse.

Zhou said further firefighting efforts must go slowly because of the potentially complex mix of chemicals at the site.

"Many types of different materials with different characteristics are mixed together and could at any time result in a chemical reaction or explosion," Zhou said.

At one point early Friday evening, a small explosion could be seen inside the cordoned-off zone, in what may have been a controlled blast by firefighters.

In an interview with the Shanghai-based publication The Paper, a fire official at the Ministry of Public Safety, Lei Jinde, was quoted as confirming that the first wave of firefighters used water to cool down areas on fire. When asked whether they knew there was calcium carbide at the warehouse, he said yes and that firefighters would not have sprayed water on the substance.

When asked whether the initial firefighter response could have sparked the second blast, Lei said "No. The response procedure must have been scientific."

On the day after the blasts, Tianjin environmental protection chief Wen Wurui told a news conference that there had been no apparent contamination of the air, based on samples taken at five air monitoring stations throughout the city. He also said all waterways leading from the disaster site to the sea had been sealed to contain any potential water leaks.

Tianjin, with a population of about 15 million, is being promoted by the Chinese government as a centre for finance and high-tech industry. The Tianjin Economic Development Area has attracted foreign investors including Motorola, Toyota, Samsung and Novozymes.

Toyota spokesman Itsuki Kurosu said Friday that more than 50 of its employees in Tianjin were among the injured, though the automaker was still confirming the extent of the injuries.

Many of the hundreds of people hurt in the explosions were cut by shattered glass.