France: 7 in custody after stabbing linked to Charlie Hebdo 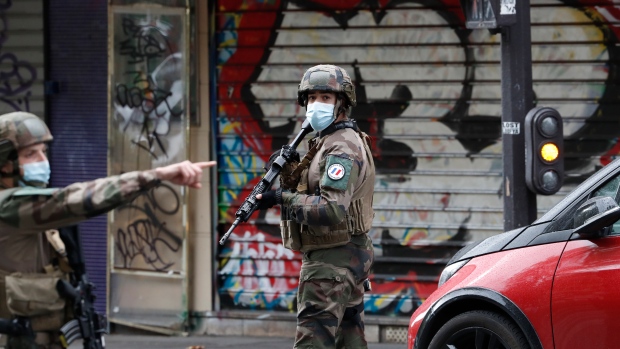 French soldiers patrol after four people have been wounded in a knife attack near the former offices of satirical newspaper Charlie Hebdo, Friday Sept. 25, 2020 in Paris. A police official said officers are "actively hunting" for the perpetrators and have cordoned off the area including the former Charlie Hebdo offices after a suspect package was noticed nearby. Islamic extremists attacked the offices in 2015, killing 12 people. (AP Photo/Thibault Camus)

PARIS - French authorities say seven people are in custody after a stabbing outside the former Paris offices of satirical newspaper Charlie Hebdo, including the suspected assailant.

Counterterrorism authorities are investigating what authorities called an Islamic extremist attack linked to Charlie Hebdo, which lost 12 employees in an al-Qaida attack in 2015.

The weekly has repeatedly published caricatures of the Prophet Muhammad that outraged Muslim militants.

Emergency services at the scene after a knife attack near the former offices of satirical newspaper Charlie Hebdo, Friday Sept. 25, 2020 in Paris. (AP Photo/Thibault Camus)