France lashes out at Britain's latest proposal on migrants 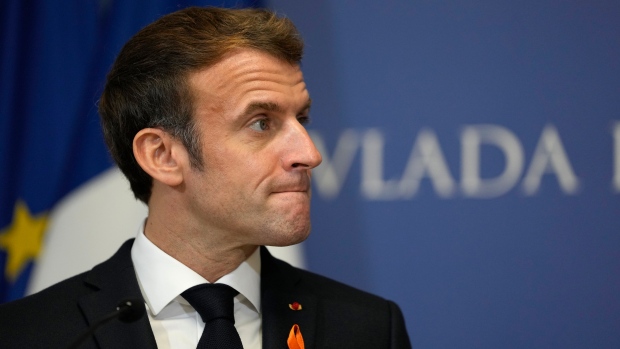 CALAIS, France (AP) - France reacted with anger and dismay on Friday to Britain's latest proposals for dealing with the deadly flow of migrants between their shores, ramping up a battle of wills over dangerous crossings of the English Channel that killed 27 people in a sinking this week.

President Emmanuel Macron scolded the office of Prime Minister Boris Johnson for making public a letter that the British leader sent to the French leader on Thursday. Most notably, Johnson proposed that France take back migrants who illegally cross the English Channel - an idea that France quickly and summarily dismissed.

“I am surprised by methods when they are not serious,” Macron said on a visit to Italy. “You don't communicate from a leader to another on these matters via tweets and letters that are made public. We are not whistleblowers.”

The letter and France's response were the latest crossing of swords in what has become an increasingly fractious relationship between the erstwhile European partners who are struggling to rebuild a working relationship in the wake of Britain's exit from the EU. They're arguing not only about migration but also about their post-Brexit agreements, including regulating fishing in waters where British and French boats both work.

Adding to the climate of tension were blockades that French fishing crews were planning Friday of French ports and traffic under the English Channel to disrupt the flow of goods to the U.K and increase pressure on Britain for more post-Brexit fishing licenses.

The spat over Johnson's letter had an immediate, concrete repercussion: Macron's government spokesman said Britain's Home Secretary Priti Patel was no longer welcome at a meeting Sunday of European ministers who'll explore ways to crack down on migrant-smuggling networks.

The spokesman, Gabriel Attal, portrayed Johnson's proposals as duplicitous, saying the letter “doesn't correspond at all” with discussions that Johnson and Macron had Wednesday after the sinking of an inflatable craft laden with migrants, the deadliest migrant tragedy to date in the English Channel.

“We are sick of double-speak,” Attal said.

He dismissed the proposal that France take back migrants who cross illegally from French shores to Britain as “clearly not what we need to solve this problem.”

Johnson also set out proposals that France has already rejected for British border officials to begin patrols on the beaches of northern France as early as next week. He also recommended joint or reciprocal maritime patrols in each other's territorial waters and airborne surveillance by manned flights and drones.

British Transport Secretary Grant Shapps said Johnson made the proposals in “good faith.” He urged France to reconsider the decision to dis-invite Patel to Sunday's ministers' meeting. They are convening in Calais, one of French coastal towns where migrants gravitate to in their attempts to get across the busy stretch of sea separating France and Britain. It was also one of the ports being targeted Friday for blockades by French fishermen.

“I don't think there is anything inflammatory to ask for close co-operation with our nearest neighbours,” Shapps told BBC radio. “The proposal was made in good faith. I can assure our French friends of that and I hope that they will reconsider meeting up to discuss it.”

Others in Johnson's Conservative Party were less conciliatory.

Tim Loughton, a lawmaker from Johnson's Conservative Party, accused France of being petulant in its response to Johnson's letter.

“The French have got to get real and recognise there are consequences from turning a blind eye rather than stopping the migrant boats at source and those consequences are tragedies like the one 2 days ago,” he said on Twitter. “Partnership working is the only way to find a solution not petulance.”

The deaths of 27 men, women and children in the dangerous waterway have brought to a head long-simmering French-British tensions that have sharpened in recent months.

U.K. officials have criticized France for rejecting their offer of British police and border officers to conduct joint patrols along the channel coast with French police. French authorities accuse Britain of stoking migration by ignoring the use by British employers of clandestine workers who crossed the Channel illegally.

Leicester reported from Le Pecq, France, and Pylas from London.

Migrants walk near a makeshift camp set up along the river in Loon Plage, near Grande-Synthe, northern France, Friday, Nov. 26, 2021. France is reacting angrily to Britain's latest proposals for dealing with the deadly flow of migrants between their shores. The angry response, delivered by government spokesman Gabriel Attal, came after British Prime Minister Boris Johnson asked that France take back all migrants who cross illegally from its shores to Britain. Johnson proposed the deal in a letter to French President Emmanuel Macron. (AP Photo/Rafael Yaghobzadeh)