French backpacker missing in Egypt for a year back in Paris 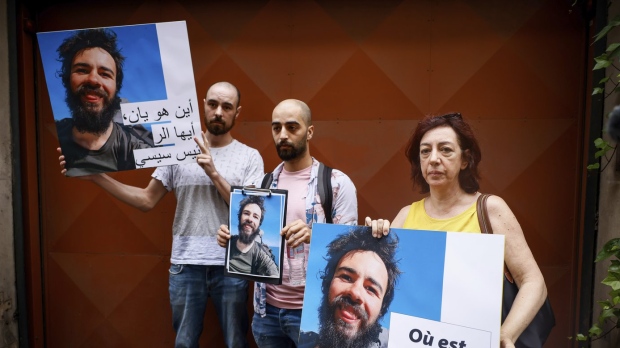 FILE - Isabel Leclercq, right, the mother of missing traveler Yann Bourdon in Egypt holds a picture of her son during a march with relatives and friends near the Elysee Palace during Egyptian President Abdel Fattah el-Sissi visiting French President Emmanuel Macron in Paris, Friday, July 22. The French backpacker, who had gone missing in Egypt a year ago, has safely returned to his family in Paris, their lawyer said on Tuesday Aug.16, 2022. (AP Photo/Thomas Padilla, File)

PARIS (AP) — A French backpacker who had gone missing in Egypt a year ago has safely returned home to Paris, a lawyer representing his family said on Tuesday.

It’s not clear what happened over the past year to Yann Bourdon, whose family had speculated that he might have been detained by Egyptian security services. The graduate student at the Sorbonne, who vanished while on a year-long backpacking journey, declined to discuss his disappearance with the media and to share details of his return to France.

Sarah Sakouti, a legal counsel for the Geneva-based Committee for Justice that had pressed the Egyptian and French authorities to investigate the 27-year-old’s disappearance, said Bourdon flew from Cairo to Paris on Aug. 10.

A day before, Bourdon had phoned his sister in Paris from the French Consulate in Cairo, Sakouti told The Associated Press. The same day, Egyptian state security services had announced they would facilitate Bourdon’s return to Paris.

Before that, his family and friends had last heard from Bourdon in August 2021.

After months of silence and stonewalling from Egyptian authorities, Bourdon’s desperate family decided to go public, and used Egyptian President Abdel Fattah el-Sissi’s official visit to Paris on July 22 to press for an investigation.

They stood on a Paris sidewalk and raised placards asking, “Where is Yann Bourdon, President Sissi?” before a motorcade drove past carrying el-Sissi to a meeting with French President Emmanuel Macron.

International rights groups have in recent years documented a growing number of forced disappearances by Egyptian authorities. Egypt’s 2011 popular uprising against Hosni Mubarak, the former longtime president, grew out of demands for an end to police brutality and extrajudicial practices.

Since el-Sissi ascended to power in 2014, most of the freedoms gained after the 2011 uprising have been revoked. The government has carried out a wide-reaching crackdown on dissent, jailing thousands of people — many of them without a trial.

The vast majority of those detained have been Egyptian citizens.