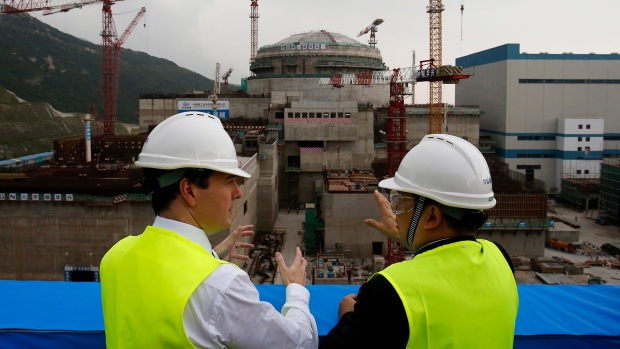 In this Oct. 17, 2013, file photo, then British Chancellor of the Exchequer George Osborne, left, chats with Taishan Nuclear Power Joint Venture Co. Ltd. General Manager Guo Liming as he inspects a nuclear reactor under construction at the nuclear power plant in Taishan, southeastern China's Guangdong province. The French joint operator of the Chinese nuclear plant near Hong Kong said Monday it is dealing with a “performance issue” but is currently operating within safety limits, following a report of a potential radioactive leak. (AP Photo/Bobby Yip, Pool, File)

SINGAPORE/PARIS, June 14 (Reuters) - French power group EDF has begun examination of a potential issue linked to a build up of inert gases at its nuclear power station in China, though the company and its Chinese partner said the plant was operating safely.

CNN reported on Monday that the U.S. government had spent the past week assessing a report of a leak at the Taishan power plant in Guangdong province run by a joint venture between EDF and China General Nuclear Power Group (CGN).

The U.S. news network reported that Framatome, the EDF business that designed the plant's reactor and remains involved in its operations, had warned of an "imminent radiological threat."

EDF said the build-up of noble gases krypton and xenon, which it said had affected the primary circuit of reactor No.1 of the Taishan plant, was a "known phenomenon, studied and provided for in the reactor operating procedures."

A group spokesman said this could be because of an issue with fuel rods and seals. Measurements of inert gases were below maximum levels authorized in China, the spokesman said, adding that it was too early to say whether the reactor would have to be shut down.

Krypton and xenon do not tend to react with other substances but they do have radioactive qualities and are therefore subject to constant monitoring.

EDF has called for a meeting with CGN to go over the findings, though no date has yet been set.

State-run CGN, the majority owner of the joint venture, said operations at the plant met safety rules and the surrounding environment is safe.

"Regular monitoring data shows the Taishan station and its surrounding environment meet normal parameters," it said in a statement on its website late on Sunday.

Framatome said it was supporting efforts to resolve the situation.

"According to the data available, the plant is operating within the safety parameters," the company said in a statement, adding that it was working with experts to assess the situation.

France's nuclear watchdog ASN had no immediate comment. The U.S. State Department and U.S. Nuclear Regulatory Commission referred queries to the Energy Department and the White House did not respond immediately to questions from Reuters.

The American Nuclear Society, a non-profit organization that promotes nuclear engineering, said it was monitoring the situation.

The Taishan reactor is the first French-designed Evolutionary Power Reactor (EPR) to become operational. The technology is also being deployed in France, Finland and at the Hinkley Point C project in Britain.

The power from the plant serves the Guangzhou and Shenzhen areas, Guangdong province's major manufacturing hubs, which have faced power shortages in recent weeks due to hot weather and lower than normal hydropower supplies from neighboring Yunnan province.

CNN said the warning by Framatome included an accusation that the Chinese safety authority was raising the acceptable limits for radiation detection outside the Taishan plant to avoid having to shut it down.

A Reuters call for comment to the National Nuclear Safety Administration went unanswered during a public holiday.