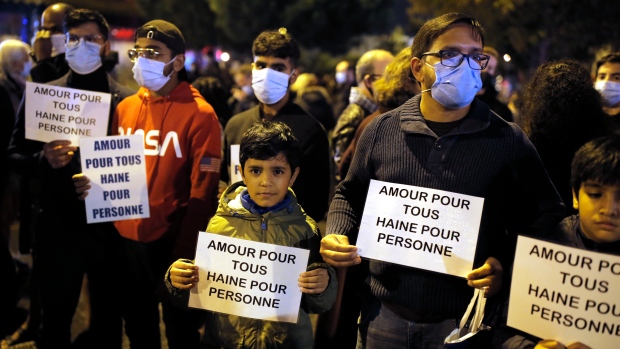 People holds posters reading "Love for all, hate for no one" during a memorial march in homage to the history teacher who was beheaded last week, Tuesday, Oct.20, 2020 in Conflans-Sainte-Honorine, northwest of Paris. Samuel Paty was beheaded on Friday by an 18-year-old Moscow-born Chechen refugee, who was later shot dead by police. Police officials said Paty had discussed caricatures of Islam's Prophet Muhammad with his class, leading to threats. (AP Photo/Lewis Joly)

PARIS - France's president on Tuesday named a domestic militant Islamist group as “directly implicated” in last week's gruesome street beheading in a Paris suburb of a teacher who had shown his class caricatures of the Prophet Muhammad.

Emmanuel Macron said the group will be ordered dissolved Wednesday, when a mosque that relayed a denunciation of the teacher is also to shut.

A terror investigation is under way into the killing by an 18-year-old Moscow-born Chechen refugee, who was later shot dead by police. The killer has been identified by authorities as Abdoullakh Anzorov.

A judicial official said early Wednesday that seven people detained in an investigation into the grisly slaying, including two minors, were to go before an investigating magistrate later in the day for eventual preliminary charges. The seven were among 16 people, including five adolescents, initially detained for questioning. Nine are being released. The official was not authorized to be quoted by name.

Investigators are trying to learn how the killer, who lived in the Normandy town of Evreux, set up his encounter with Paty, whether there was complicity and whether the beheading was premeditated.

Speaking after a meeting with regional officials working to counter radical Islamists, Macron added that other associations and individuals are on the radar to be shut or silenced.

Meanwhile, more than 1,000 people gathered in drizzly rain to honour Samuel Paty where he was beheaded Friday as he left school in Conflans-Sainte-Honorine, northwest of Paris. Bouquets of flowers were piled in front of the school.

Paty had shown caricatures of the prophet of Islam to his class earlier this month for a discussion on freedom of expression. His civics course led to parental complaints and threats.

Speaking in the Seine-St.-Denis region, northeast of Paris, Macron reiterated Tuesday that he wants “tangible results” to combat “an ideology of destruction of the (French) Republic.”

Macron said a group called the Collective Cheikh Yassine will be ordered dissolved at Wednesday's Cabinet meeting. Named after a slain leader of the Palestinian Hamas, the group was founded in the early 2000s by a man who is among those detained for questioning. Macron did not provide details on how the group was “directly implicated” in the attack.

Interior Minister Gerald Darmanin said later on BFMTV that the person in question helped disseminate the virulent message of a student's father against the teacher in what increasingly appeared to be a case turning in part on a spiraling fever on social media among some Muslim individuals or groups.

The beheading resonated far beyond France with the grand imam of Al-Azhar, the Sunni Muslim seat of learning in Cairo, dissociating himself and all Muslims from the attack in a message read to faith leaders at an interfaith prayer service Tuesday in Rome. Calling the beheading “sinful and criminal,” he also said that intellectual integrity is compromised by “insulting religions and abusing sacred symbols under the slogan of freedom of expression.”

Macron has asked for quick, concrete action in the case. The French president is waging war on what he calls “separatism,” referring to Islamist extremism that authorities say has created a parallel world in the country that counters French values.

The Pantin mosque is being punished for relaying the angry father's message on social media that called for mobilization against the teacher. The father quoted his 13-year-old daughter as saying the teacher had asked Muslims to leave the classroom - a version that was contested by Paty himself, according to press reports.

Authorities say the mosque has long had an imam following the Salafist path, a rigorous interpretation of the Muslim holy book.

Pantin was also the home of an 18-year-old Pakistani refugee who three weeks earlier attacked and injured two people with a meat cleaver.

A national memorial event will be held Wednesday evening to pay tribute to Paty in the courtyard of Sorbonne university, a centuries-old symbol of the “spirit of Enlightenment” and “a forum to express ideas and freedoms,” the French presidency said.

Associated Press journalists Nicolas Garriga in Pantin, Sylvie Corbet in Paris and Nicole Winfield in Rome contributed to this report.