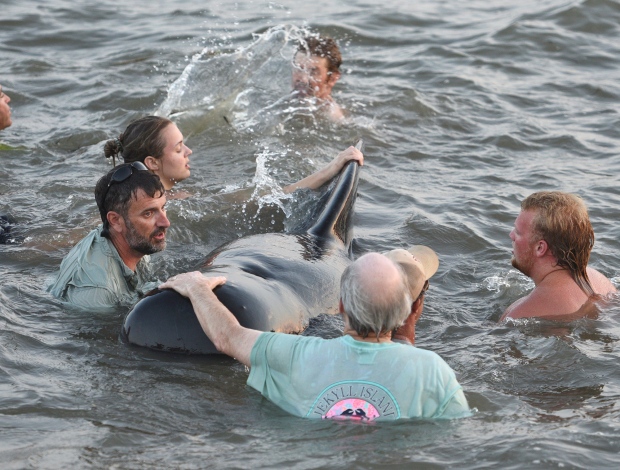 Georgia Department of Natural Resources personnel and beachgoers struggle to keep a short-fin pilot whale from crashing into the seawall on St. Simons Island, Ga., Tuesday, July16, 2019. Dozens of pilot whales beached themselves on a Georgia shore and most were rescued by authorities and onlookers who pulled the animals further into the water. (Bobby Haven /The Brunswick News via AP)

SAVANNAH, Ga. - A summer afternoon at the beach quickly became a scramble to save a pod of disoriented pilot whales, as vacationers on a popular Georgia island joined lifeguards and state wildlife crews in the water to stop dozens of the large marine mammals from beaching themselves.

Officials were hopeful they had saved most of the short-fin pilot whales that swam perilously close to shore Tuesday on St. Simons Island, about 70 miles (112 kilometres) south of Savannah.

Harbour pilots spotted a large group of whales in the nearby shipping channel early Wednesday, and by mid-afternoon they were swimming in deeper water about 6 miles (9.6 kilometres) from shore, said Clay George, a wildlife biologist with the Georgia Department of Natural Resources.

He said conservationists from the National Marine Mammal Foundation who followed the pod by boat Wednesday counted at least 45 whales, which they described as vocalizing and swimming actively. George said he was “cautiously optimistic” they would keep moving out to sea.

“You're talking about animals that should be living 100 miles (160 kilometres) offshore,” George said. “So something went wrong. ... They shouldn't be in a situation where they can feel sand beneath them.”

Pilot whales, members of the dolphin family, can grow up to 20 feet (6 metres) long and weigh as much as 3 tons (2.7 metric tons). Pilot whales are often involved in mass strandings, partly due to their social nature, according to the American Cetacean Society.

Three whales died on the beach in Georgia, including one officials decided to euthanize. George said necropsies were planned to determine if the whales were sick and look for other clues to why they may have come ashore.

Video posted online showed beachgoers and lifeguards splashing water onto whales near the shore and in some cases trying to push them away from the beach. George said most of the whales came within 50 feet (15 metres) of shore, and several tried to beach themselves repeatedly.

“That's a spooky situation because most of those animals are probably healthy and just followed others to the shore,” George said. “Most of them luckily remained in shallow water. If they had beached themselves, they probably would have all ended up dead.”

Pilot whales have been known to strand themselves multiple times over an extended period. In July 2002, roughly 60 pilot whales died or were euthanized on Cape Cod, Massachusetts, and nearby beaches. Whales stranded themselves in three waves over two days.

Pilot whales have a social hierarchy and are known to stick together, even when some become sick or injured, said Tony LaCasse, spokesman for the New England Aquarium in Boston.

“They tend not to leave animals behind,” LaCasse said. “In a near-shore environment, that can be their death knell.”