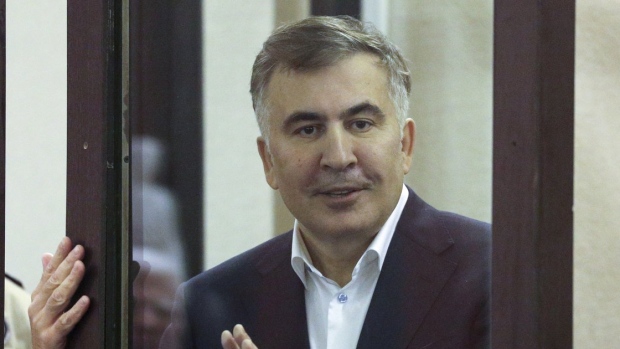 FILE - Former Georgian President Mikheil Saakashvili, who was convicted in absentia of abuse of power during his presidency and arrested upon his return from exile, gestures speaking from a defendant's dock during a court hearing in Tbilisi, Georgia, on Dec. 2, 2021. The main opposition party in Georgia has filed a court case calling for the imprisoned ex-president of the country to be released for medical examination overseas because of concerns that he is suffering from poisoning. (Irakli Gedenidze/Pool Photo via AP, File)

TBILISI, Georgia (AP) — The main opposition party in Georgia has filed a court case calling for the imprisoned ex-president of the country to be released for medical examination overseas because of concerns that he is suffering from poisoning.

The United National Movement said Mikheil Saakashvili's “condition may lead to coma and death” and that he should be sent to a high-level clinic in the United States or the European Union.

Saakashvili, who served as president in 2004-13 and led the so-called Rose Revolution protests that drove the previous president out of office, left Georgia for Ukraine after the end of his second term and was later convicted in absentia of abuse of power and sentenced to six years in prison.

He was arrested in October 2021 after returning to Georgia to try to bolster opposition forces before nationwide municipal elections.

In a statement last week, the UNM, which Saakashvili formerly headed, said that although he was generally healthy at the time of his arrest, he has since suffered weight loss, musculoskeletal pains and muscle atrophy “which may be the result of of an undiagnosed infectious process and/or possible intoxication.”

The party said toxicological examination showed him with elevated levels of barium, bismuth and mercury. It also said he most likely suffered a spinal injury in prison and developed a severe form of traumatic stress disorder.

The statement said the conclusions were based on examination by Georgian and foreign experts conducted through the Empathy Center, a Georgian anti-torture NGO.

The government has not responded to the court filing. But Irakli Kobakhidze, chairman of the ruling Georgian Dream party, said there are no grounds for releasing Saakashvili.