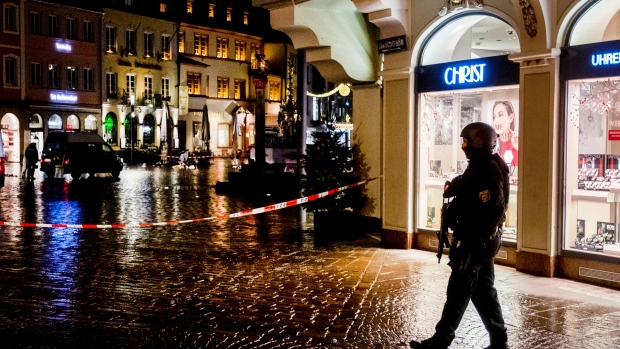 Police officers guard the scene of an incident in Trier, Germany, Tuesday, Dec. 1, 2020. German police say people have been killed and several others injured in the southwestern German city of Trier when a car drove into a pedestrian zone. Trier police tweeted that the driver had been arrested and the vehicle impounded.(AP Photo/Michael Probst)

BERLIN - Residents of Trier placed flowers and lit candles at the base of the southwestern German city's landmark Roman gate Wednesday in tribute to the five people who were killed and more than a dozen others injured when a man sped an SUV through a central pedestrian zone. His motive remained unclear.

A judge ordered the suspect, a 51-year-old local man whose name hasn't been released, held in custody as he is investigated on five counts of murder, and 18 counts of attempted murder and causing bodily harm, prosecutor Peter Fritzen said in a statement.

Authorities do not believe the suspect drove into the pedestrians on Tuesday for any political, religious or similar reason, but haven't yet been able to determine a motive, Fritzen said.

Statements the suspect made to police immediately after his arrest kept changing and were “partially incomprehensible,” the prosecutor said.

“The suspect also showed psychological abnormalities in his behaviour during and after his arrest and in police custody,” Fritzen said. A comprehensive psychological examination has been ordered, but at the moment there are no “concrete indications” of a mental health condition that would rule out holding the suspect responsible for his actions.

The man had been drinking heavily before the attack, Fritzen said. Questioning will continue over the next few days.

“The victims and their families need answers,” Trier Mayor Wolfram Leibe told reporters near the makeshift memorial that was growing at the Roman gate, the Porta Nigra, near where the driver was arrested.

The five people killed included a 45-year-old man and his 9 1/2-week-old daughter. The man's wife and 1 1/2-year-old son were among the injured receiving treatment in a hospital, police said.

Police originally identified the baby as a 9-month-old but then corrected her age. The others killed were three women, ages 25, 52 and 73.

All of those people killed were German citizens, and the man and his baby also had Greek citizenship, Fritzen said.

Of the 18 people injured, six were considered in serious condition. The injured included a dual German-Dutch national and a citizen of nearby Luxembourg.

Police received the first call about the attack at 1:47 p.m. and were able to apprehend the suspect four minutes later after he stopped the car and they blocked him in.

Zig-zagging through the pedestrian zone, the suspect travelled about 800 metres (875 yards) in total, “leaving behind him a trail of dead, injured and rubble,” police said.

An earlier version of this story was corrected to show that the age of the youngest victim is 9 1/2 weeks, not 9 months, based upon corrected information received from police.