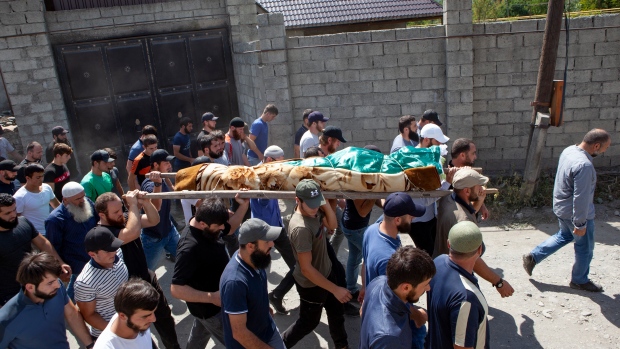 FILE-In this Aug. 29, 2019 file photo people carry the body of the victim who has been identified as Zelimkhan Khangoshvili, a Georgian Muslim during the funeral in Duisi village, the Pankisi Gorge valley, in Georgia. Germany’s foreign ministry says it has expelled two Russian diplomats after prosecutors announced they suspected Moscow’s involvement in the brazen daylight slaying of a Georgian man in Berlin. (AP Photo/Zurab Tsertsvadze)

BERLIN -- Germany expelled two Russian diplomats Wednesday over the brazen killing of a Georgian on the streets of Berlin in August as prosecutors said evidence suggested the slaying was ordered either by Moscow or authorities in Russia's republic of Chechnya.

The allegation by Germany's federal prosecutor's office was the latest from a Western European nation accusing Russia of an attack on its soil, after Britain last year blamed Moscow for an attempt to poison a former Russian spy in the English city of Salisbury.

Russia denied those allegations, and similarly Russia's ambassador to Germany Sergey Nechaev rejected the accusations in the Berlin killing, while threatening consequences for the expulsion of its diplomats.

“Such German action will have a strong negative impact on the Russian-German relations and naturally will not be left unanswered,” Nechaev said in a statement.

The case comes at a delicate time in relations between the two nations, as Germany pursues a hard line on sanctions against Russia for its annexation of Crimea, but at the same time is working on a joint pipeline project to bring Russian gas directly to Germany under the Baltic. Germany also needs Russia's help to salvage the nuclear deal with Iran, which has been unraveling since President Donald Trump pulled the United States out of it unilaterally last year.

On Aug. 23, a 40-year-old man initially identified as Zelimkhan Khangoshvili, an ethnically Chechen Georgian citizen, was gunned down in a Berlin park on his way to a mosque by an assailant on an electric bicycle who sped away and ditched the bike, weapon and a wig in the Spree River, according to news reports.

German authorities said Khangoshvili was also known as Tornike K., and that Russian authorities had him on a terrorist list and accused him of being a member of the “Caucasus Emirate” extremist organization.

Tornike K. was known to have fought against Russian troops in Chechnya. He had previously survived multiple assassination attempts and continued to receive threats after fleeing to Germany in 2016.

Witnesses saw the suspect disposing of the evidence after the killing and alerted police, who quickly identified and arrested the man, identified at the time as 48-year-old Russian national Vadim K. Prosecutors said he went by the alias Vadim S., and German and international news outlets have reported his full name as Vadim Sokolov.

Prosecutors said they had found multiple indications that he carried out the attempt with official help, and no evidence that the hit was “contracted by a nonstate actor.”

Federal prosecutors took over the investigation from Berlin state prosecutors after the political nature of the case became evident, spokesman Markus Schmitt told The Associated Press.

“There are enough indications of the fact that the death of Tornike K. was either contracted by government offices of the Russian Federation or the autonomous Chechen Republic as part of the Russian Federation” to suggest a political motive, Schmitt's office said in a statement, using only a last initial for the victim in line with German privacy laws.

Immediately after Schmitt's office said it had taken over the case, the Foreign Ministry announced the expulsion of two Russian diplomats, citing a lack of co-operation with the investigation.

“Russian authorities, despite repeated, high-level and insistent demands, did not participate enough in the investigation,” the Foreign Ministry said in a statement. It did not identify the two diplomats being expelled.

Russian Foreign Minister Sergey Lavrov, whose office issued a statement saying Berlin's “politicized approach to the investigation is inappropriate,” said Moscow will look into the claims made by German authorities but that it would take time to respond.

Speaking on the sidelines of a NATO meeting outside London, Chancellor Angela Merkel said she planned to talk about the issue with Putin when she meets with him next week in France for talks on the Ukraine peace process.

“We have received no active help from Russia in solving this case,” she said, sidestepping a question on whether it would harm bilateral relations between the two nations.

“The symmetrical position of the Russian Foreign Ministry is absolutely reasonable in this case,” he added.

German investigators used facial recognition techniques to match the suspect to a photograph Russia had sent partner agencies in 2014 as it sought help finding Vadim K. in connection with a killing in Moscow. That request was cancelled on July 7, 2015, and a person with the identity of Vadim S. first appears on Sept. 3, 2015, with a Russian passport.

Russian authorities confirmed the suspect's passport, found on him at the time of his arrest, was valid, prosecutors said.

Under the identity Vadim S., prosecutors said he flew on Aug. 17, 2019, from Moscow to Paris and had been granted a visa by French authorities. In his visa application, prosecutors said the suspect claimed to work for a St. Petersburg, Russia, firm known as Zao Rust.

Investigators found that Zao Rust had only one employee in 2018 and on April 10, 2019, was listed as being in “reorganization.” The company's fax number was one used by two firms that are operated by the Russian Defence Ministry, prosecutors said.

He left Paris on Aug. 20 and flew to Warsaw where he had a hotel booked until Aug. 25. Upon arrival, he extended his room to Aug. 26, but left at 8 a.m. on Aug. 22 and never returned, prosecutors said.

It is not clear, they said, what he did between his departure from the hotel and the killing in Berlin at 11:55 a.m. on Aug. 23.

The case evokes memories of the attempt to poison Sergei Skripal, a Russian spy turned double agent for Britain, with the nerve agent Novichock in Salisbury in 2018. Britain blamed the attack on Russian intelligence and Moscow denied involvement.

Afterward, Western nations banded together to expel more than 100 Russian diplomats they accused of being spies, including 60 from the U.S.