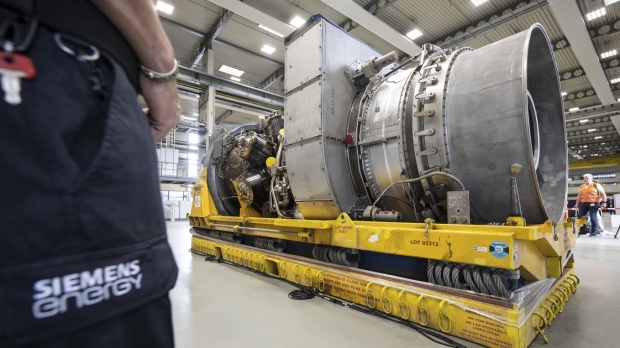 Employees stand around the turbine serviced in Canada for the Nordstream 1 natural gas pipeline in Muelheim an der Ruhr, Germany, Aug. 3, 2022. German Chancellor Olaf Scholz visited a plant by Siemens Energy where a turbine, which is at the center of a dispute between Germany and Russia over reduced gas supplies, is currently sitting in storage until it can be shipped to Russia. (Bernd Thissen/dpa via AP)

Germany, the European Union's biggest economy, is quickly trying to wean itself off using natural gas from Russia in response to Moscow's attack on Ukraine. However Germany uses more Russian gas imports than many other EU nations. Russia has already cut off gas exports to several EU nations, and officials fear Moscow will use the gas exports as a political weapon to get sanctions against Russia reduced — or even cut the exports to Europe off altogether in the winter, when demand is the highest.

Economy Minister Robert Habeck said while the EU's 27 countries have pledged to cut their gas use by 15% from August compared to the previous five-year average, Germany needs to reduce its consumption by 20%.

Habeck is also proposing banning the heating of non-commercial private pools; switching off heating in common areas of public buildings, such as foyers; and switching off the lights on public billboards between 10 p.m. and 6 a.m.