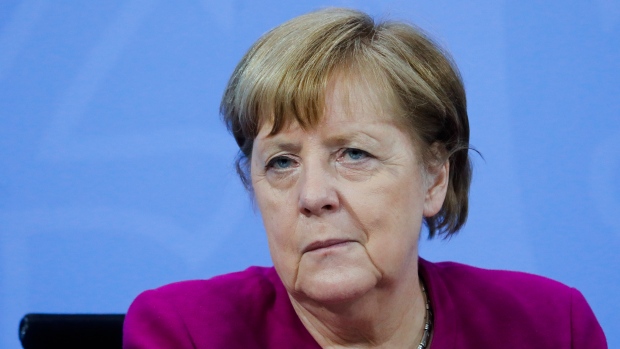 BERLIN - Germany is extending its coronavirus shutdown by three weeks until March 28, but easing some restrictions to allow nonessential stores and other businesses to reopen in areas with relatively low infection rates.

After about nine hours of talks, Chancellor Angela Merkel and the governors of the country's 16 states agreed Wednesday to measures aimed at balancing concern over the impact of more contagious coronavirus variants with a growing clamour for a return to a more normal life.

The first moves have already been made: many elementary students returned to school last week. And on Monday, hairdressers opened after a 2 1/2-month break. Current lockdown rules were set to run through Sunday.

On Wednesday, Merkel and the state governors -- who in highly decentralized Germany have the power to impose and lift restrictions -- set out a phased plan that allows for a gradual, if limited, relaxation of restrictions.

“These should be steps toward opening but at the same time steps that do not set us back,” Merkel told reporters in Berlin. “There are a great many examples in Europe of a dramatic third wave.”

She pledged that “spring 2021 will be different from spring a year ago.”

Regions where infection rates are relatively low, though not as low as previously envisioned, will be able to open nonessential stores, museums and other facilities on a limited basis.

When they last conferred on Feb. 10, Merkel and the governors set a target of 35 weekly new cases per 100,000 inhabitants before letting small stores, museums and other businesses reopen. The aim is to enable reliable contact-tracing.

But reaching that target soon appeared increasingly unrealistic as cases of the more contagious variant first detected in Britain increased, with overall infections creeping slightly higher. The cases-per-week number, which peaked at nearly 200 per 100,000 inhabitants just before Christmas, has been stalled above 60 in recent days.

Wednesday's decisions opened up the possibility of reopening more businesses at various stages above the 35 target, though they included an “emergency brake” mechanism that would see the restrictions now in place reimposed if the weekly infection level exceeds 100 per 100,000 residents on three consecutive days.

Regions can open nonessential shops next Monday if weekly infections are below 50 per 100,000 residents, and at least allow people to collect pre-ordered goods and to visit museums and zoos with appointments above that level.

If infections are “stable” below the 50 mark two weeks later, regions will be allowed to open theatres, cinemas, outdoor areas of restaurants and allow some indoor sports. After another two weeks, they can allow outdoor events with up to 50 participants and contact sports indoors.

That will be accompanied by an increase in tests, which will be required in some places depending on infection figures. Everyone will be offered at least one free rapid test per week.

Germany has seen the number of deaths from COVID-19 and people in intensive care decline in recent weeks.

But it has been struggling to ramp up its vaccination drive, which has drawn widespread criticism for being too slow, even as the supply of vaccines improves. German lawmakers have ditched plans for hefty fines for people who skip the vaccine queue.

On Wednesday, the country's leaders agreed to change the rulebook to speed up vaccinations. Merkel said that they “want to use all flexibility” - extending the length of time between first and second shots as far as possible, allowing more people to get the initial dose.

After Germany initially limited the AstraZeneca vaccine - one of three cleared for use in the European Union - to people under 65, an independent expert committee is likely to recommend lifting that restrictions, Merkel said.

As of Tuesday, 5.3% of the population had been given a first vaccine dose and 2.7% had received two doses.

On Wednesday, the Robert Koch Institute, Germany's national disease control centre, said an analysis of nearly 25,000 samples found that the British variant accounted for about 46% of cases last week - up from 22% two weeks earlier.

The disease control centre said Wednesday that 9,019 new coronavirus cases were reported over the past 24 hours, bringing the total so far to 2.46 million. There were another 418 deaths in the nation of 83 million, raising Germany's death toll to 70,881.

Merkel and the governors will confer again on March 22 to discuss further possible steps toward opening up public life.