Germany's Merkel seen shaking for 3rd time in a month 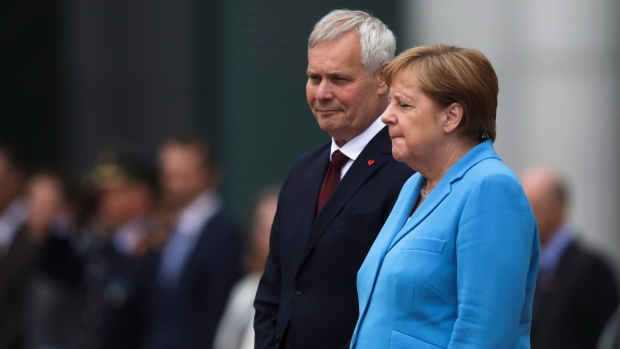 German Chancellor Angela Merkel and Prime Minister of Finland Antti Rinne listen to the national anthems at the chancellery in Berlin, Germany, Wednesday, July 10, 2019. Merkel's body shook visibly as she stood alongside the Finnish prime minister and listen to the national anthems during the welcoming ceremony at the chancellery.(AP Photo/Markus Schreiber)

BERLIN -- German Chancellor Angela Merkel has been seen shaking at a public event for the third time in less than a month.

Merkel's body shook visibly as she stood at a military honours ceremony alongside the Finnish prime minister outside the chancellery in Berlin on Wednesday.

It followed similar episodes on June 18 and June 27, and as in both those cases the 64-year-old recovered quickly as she started walking. The first incident happened in hot weather, and Merkel said afterward that she was fine after drinking three glasses of water. On Wednesday, the weather was cool.

Merkel said as she attended the Group of 20 summit in Japan on June 29 that she understands questions surrounding her health, but insisted: "I'm fine."