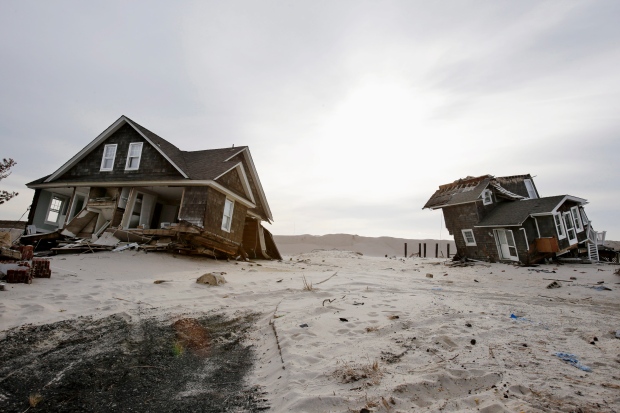 WASHINGTON -- A study of a dozen of 2012's wildest weather events found that man-made global warming increased the likelihood of about half of them, including Superstorm Sandy's devastating surge and shrinking Arctic sea ice.

The other half -- including a record wet British summer and the U.S. drought last year -- simply reflected the random freakiness of weather, researchers with the U.S. National Oceanic and Atmospheric Administration and the British meteorological office concluded in a report issued Thursday.

The scientists conducted thousands of runs of different computer simulations that looked at various factors, such as moisture in the air, atmospheric flow, and sea temperature and level.

The approach represents an evolution in the field. Scientists used to say that individual weather events -- a specific hurricane or flood, for example -- cannot be attributed to climate change. But recently, researchers have used computer simulations to look at extreme events in a more nuanced way and measure the influence of climate change on their likelihood and magnitude.

This is the second year that NOAA and the British meteorology office have teamed up to look at the greenhouse gas connection to the previous year's unusual events.

"We've got some new evidence that human influence has changed the risk and has changed it enough that we can detect it," study lead author Peter Stott, head of climate monitoring and attribution for the British meteorological office, said at a news conference.

The 78 international researchers, however, found no global warming connection for the U.S. drought, Europe's summer extremes, a cold spell in the Netherlands, drought in eastern Kenya and Somalia, floods in northern China and heavy rain in southwestern Japan.

That does not mean that there weren't climate change factors involved, just that researchers couldn't find or prove them, said the authors of the 84-page study, published in the Bulletin of the American Meteorological Society

All 12 events -- chosen in part because of their location and the effect they had on society -- would have happened anyway, but their magnitude and likelihood were boosted in some cases by global warming, the researchers said.

The two events where scientists found the biggest climate change connection both hit the United States.

The likelihood of the record July U.S. heat wave that hit the Northeast and north-central region is four times greater now than in preindustrial times because of greenhouse gases, Stanford University climate scientist Noah Diffenbaugh found in his analysis.

The kind of surge-related flooding that Superstorm Sandy brought to parts of New York City is about 50 per cent more likely than it was in 1950, said study co-author William Sweet, a NOAA oceanographer.

Stott said one of the hardest connections to make is for rainfall. The researchers were able to connect three of the eight instances of too much or too little rain to climate change; the five other instances were attributed to natural variability.

The different authors of the 21 chapters used differing techniques to look at climate change connections, and in some instances came to conflicting and confusing conclusions.

Georgia Institute of Technology professor Judith Curry, who often disagrees with mainstream scientists, said connecting shrinking sea ice to human activity was obvious, but as for Sandy and the rest: "I'm not buying it at all."