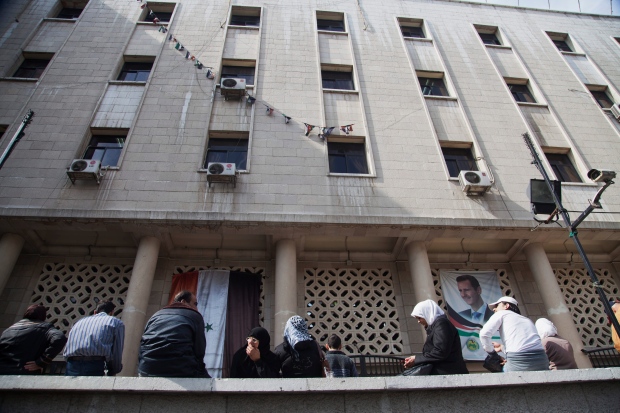 In this Sunday, Oct. 26, 2014 photo, people wait outside a post office building adorned with a picture of President Bashar Assad, in the Syrian capital, Damascus. Syrians are adjusting to life in their truncated country. Despite being battered by a war, now in its fourth year, the country is still firmly under the grip of Assad despite an armed rebellion to uproot him and losing territory to opposition rebels and the extremist Islamic State group. (AP /Diaa Hadid)

TARTOUS, Syria -- Syrian businessmen start from scratch after their shops and factories were destroyed. Families who lost their homes struggle to rent new dwellings and make ends meet. Along highways stretching through government-controlled areas are the bombed ruins of once-rebellious towns, now dotted with checkpoints.

Government-controlled Syria is truncated in size, battered and impoverished. But it carries on, underscoring how Syrian President Bashar Assad's government has clung to power, despite an armed rebellion to uproot him, now well into its fourth year.

Visits the past week to the capital, Damascus, and the coastal region of Tartous, a stronghold of government support, show how Syrians have adjusted to life in this reduced country. Thick barriers surround government buildings, painted in the red, black and white of the Syrian flag. Assad's portrait is everywhere: as a soldier, a businessman and a father.

After years of brutal back and forth, the government rules over Damascus and a sweep of territory west to the Mediterranean coastal region that includes Syria's biggest cities, along with some parts south of the capital. Rebels hold some suburbs in the countryside around Damascus and parts of the northwest. The extremist Islamic State group has imposed its rule over territory encompassing a third of both Syria and neighbouring Iraq.

The war constantly intrudes. The persistent thud of bombings of nearby rebel-held areas is the soundtrack of Damascus.

"Got any cigarettes, sir?" one soldier hopefully asks a driver.

Mustachioed men with assault rifles peer into cars at the entrance of the historic Bab Touma area of Damascus. The majority Christian district is a favourite target for mortars from the nearby rebel-held neighbourhood of Jobar. Anti-Assad activists accuse some pro-government militias of being more brutal than soldiers, and say they demand bribes and steal cars.

Leaving Damascus, the highway is well-paved, including a strip of freshly asphalted road. Nearby stands part of the smashed remains of the town of Nabak, whose residents rebelled against Assad early in the uprising. The yellow Ferris wheel in Nabak's amusement park is faded.

Graffiti nearby reads "Assad for eternity." Another reads: "I love you Lulu."

It's unclear how many Syrians live in rebel- and government-controlled areas, given the demographic upheaval in a country where nearly half of the population has fled their homes. Areas once dominated by Assad-loyal minorities, like the Alawite-dominated coastal region of Tartous, have seen their communities change character as they host some 350,000 displaced people, mostly Sunni Muslims.

That ultimately will have a longer-term effect: It will be difficult for Assad's government to carve out an Alawite bastion, as some critics suggest he is doing -- and which government officials deny.

It also highlights the fact that Sunnis, who form the country's majority faith group, form Assad's chief power base, even as the rebellion is dominated by Sunnis. Minorities, like the Alawites, Shiites and Christians, mostly support the government or have remained neutral.

The displaced include a Muslim preacher, Mustafa Sobhi and his wife, Faten Shaar, who fled to a town in Tartous province after rebels burned down their pharmaceutical factory. Sobhi says the rebels in his hometown in the northern city of Aleppo punished him because his son, Majed, was in the army. Majed was killed in March last year.

Sobhi's other son now sells sandwiches outside a local university. The upper-middle-class family's fortunes were destroyed in the war, but they were safe in Tartous, Sobhi says.

"We have to be one hand," he says, sitting beside his wife on a thin mattress on the floor, the apartment's only furniture. A large poster of their slain son in his army uniform and another praising Assad hangs on the wall.

The displaced include Sunni traders from Aleppo, once the country's industrial powerhouse. Some have re-opened businesses in Tartous on a smaller scale.

Mohammed Jallad, an oven maker, fled as fighting intensified in his Aleppo neighbourhood. His home and business were destroyed in shelling.

With a loan, he reopened business in Tartous, sharing an industrial space with four other Aleppo men. He sleeps in a nook above his ovens to save money.

His shop's rent tripled over two years as demand by displaced people rose. From 15 workers in Aleppo, he now employs two.

Jallad says he doesn't want to flee abroad, fearing he would join the fate of some 3 million Syrian refugees who mostly live in miserable circumstances.

"I wanted to work, so where could I go? The situation abroad is humiliating," he says.

As Syrians struggle to get by, they have adjusted to reality.

Taghrid, an embroiderer in Damascus, says she sent her army-age son to Egypt to avoid conscription, something many families have done.

"May God protect him," she says outside Damascus' grand Umayyad Mosque. She only gave her first name out of fear of endangering her son.

Government services, while scrappy, still exist. Workers receive salaries, even if the local currency is falling. There is still power, though cuts are routine. Health care is still free, although residents say waits are long as doctors leave their posts.

"The Syrian government holds and clings to the unity and territorial integrity of Syria. And this for us is a sacred issue," Assad adviser Bouthaina Shaaban says.

Life continues on for Syria's wealthy. Cafes and restaurants in Tartous are half-filled, with apologetic owners saying young people being back at school has cut into their crowds. Businessmen have opened an entertainment centre and mall in Damascus and a seven-story shopping centre in Tartous.

"This is a time of opportunity," he says.