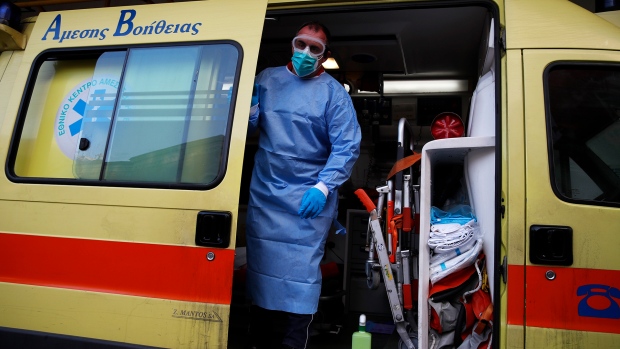 A paramedic wearing a suit to protect against coronavirus, closes the door of an ambulance at Evangelismos hospital in Athens, Thursday, Nov. 12, 2020. Greece has imposed a nationwide nightly curfew as the number of COVID-19 cases in the country continues to surge despite a lockdown. (AP Photo/Thanassis Stavrakis)

THESSALONIKI, Greece -- Greek authorities are taking over two private health clinics in the northern city of Thessaloniki as the region's public hospitals struggle to cope with a surge in coronavirus cases, the country's Health Ministry said Friday.

The ministry said its request for private hospital beds to be made available voluntarily for the treatment of COVID-19 patients in northern Greece, where the outbreak is the most severe, had been rejected.

“Despite the effort, the finding of a mutually acceptable solution was not possible,” the ministry said. It added it was forcibly appropriating the two clinics and their staff as of Friday.

The head of Greece's union of private clinic owners, Grigoris Sarafianos, said health authorities requested on Thursday that 200 private beds be made available to the state for coronavirus patients by 9 p.m. the same day.

Sarafianos, who owns one of the two appropriated clinics, said an agreement reached with health authorities in March and renewed in September was for private clinics to provide beds for non-coronavirus patients.

“We don't want to become centres of transmission,” said Sarafianos, who added that doctors and nurses would need special training to deal with COVID-19 patients.

Sarafianos also voiced concern that once the appropriation ends, prospective patients would avoid the two clinics for fear of catching the coronavirus.

Government spokesman Stelios Petsas said fears of transmission of the virus to other patients were unfounded.

“When we are at war, we treat the entire country as one health district,” Petsas told ERT1 television. He said patients without the coronavirus would be transferred from the appropriated clinics to other private or public facilities.

He said the appropriated clinics would be used for simple hospital beds and not intensive care units.

Greece largely escaped the initial outbreak of coronavirus in the spring, with the government credited for imposing an early lockdown.

But it has seen a major resurgence of the virus after the summer, leading to dozens of deaths each day and thousands of new infections. Nearly 500 people are intubated in intensive care units across the country.

According to the latest figures issued Thursday evening, there were more than 85,200 confirmed coronavirus cases and a total of nearly 1,350 deaths in the country of about 11 million people.

A nationwide lockdown has been imposed until the end of the month, with retail stores, schools, bars, restaurants and all entertainment venues shut and a curfew in place between the hours of 9 p.m. to 5 a.m.

Petsas indicated, however, that current conditions made it likely the restrictions would be extended.

“At the moment it seems it is not a realistic target to start relaxing or for a part of the economy to return to normal from Dec. 1,” he said.

The outbreak has been particularly severe in northern Greece. Authorities have been increasing the number of intensive care beds in the country, doubling the number available since mid-2019 when the current government came to power.

Of 1,220 intensive care beds now available nationwide, 651 have been made available exclusively for COVID-19 patients, according to figures released Friday. Of those, 555 are already occupied, leaving an availability of just 15%. Thessaloniki has 218 ICU beds available for COVID-19, of which 210 are occupied and just eight are still available.

Nationwide, Greece currently has a total of 6,362 hospital beds dedicated to coronavirus patients, of which 4,079 were occupied on Friday.