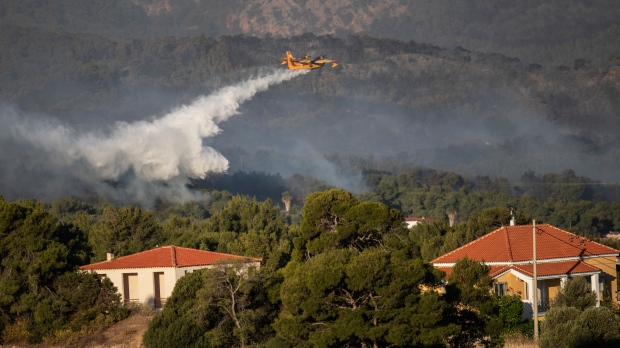 A firefighting airplane drops water near the village of Alepochori , Greece, on Friday, May 21, 2021. A large wildfire burning for a second day west of Athens damaged homes and prompted evacuations as it tore through rugged forest terrain. (AP Photo/Petros Giannakouris)

ATHENS, Greece - Greek firefighters are battling a major forest fire in the Corinth region west of Athens for a second day, with more settlements evacuated overnight.

Dozens of houses were also destroyed, mostly holiday homes or small dwellings outside of villages.

The fire, which broke out late Wednesday near the village of Schinos, was fanned by gale-force winds.

The Greek capital about 70 kilometers to the west was blanketed with acrid smoke throughout the day Thursday.

Authorities say firefighters have managed to prevent the flames from reaching a wildlife refuge in the area.