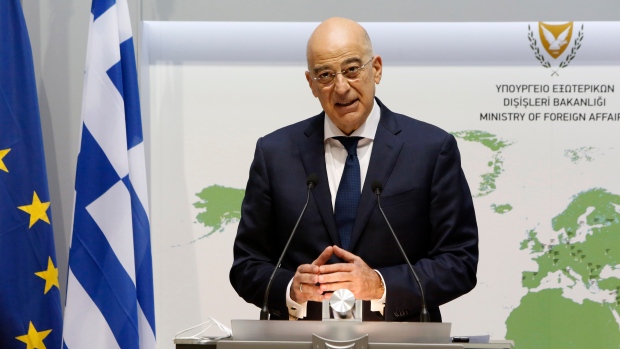 Greek Foreign Minister Nikos Dendias talks to the media during a press conference after a meeting with his Cyprus counterpart Nicos Christodoulides at the foreign ministry house in divided capital Nicosia, Cyprus, Dec. 4, 2020. Dendias and Christodoulides were meeting to coordinate their course of action ahead of a summit of European Union leaders next week to decide on a Turkish hydrocarbons search in waters where Cyprus and Greece claim exclusive rights and which EU officials have called " provocative"and "unlawful." (AP Photo/Petros Karadjias, Pool)

Nikos Dendias said Turkey opted not to seize an opportunity that European Union leaders offered it in October to ease tensions in the region so that the 27-member bloc could start reshaping its fraught relations with Ankara.

Turkey last week ordered the research vessel Oruc Reis back to port after completing what it said was seismic research in east Mediterranean waters. The warship-escorted vessel's activities in waters where Greece asserts jurisdiction prompted a military build-up between the two neighbours and nominal NATO allies.

Greece countered by also sending its warships, and both countries conducted military exercises to assert their claims. NATO stepped in to prevent a potential armed conflict.

But Dendias said the ship's return to port wasn't enough.

“Turkey's belated moves in recent days to supposedly de-escalate tensions are not convincing.” Dendias said after talks with his Cypriot counterpart, Nikos Christodoulides. “That's why we have jointly asked all other European Union member states to live up to their responsibilities.”

“These decisions are significant not only as a clear message to Turkey, but also to prove the European Union's credibility.”

Dendias and Christodoulides also said Turkey continued prospecting for hydrocarbons in waters where Cyprus claims exclusive rights in violation of international law, while continuing to “provoke” with its partial opening of an abandoned Greek Cypriot suburb in the breakaway Turkish Cypriot north of war-divided Cyprus.

Ankara says Greece and Cyprus' Greek Cypriot-led government are flouting the energy rights of Turkey and breakaway Turkish Cypriots by setting maritime boundaries according to their own interests and attempting to exclude Turkey from potential oil and gas reserves.

Christodoulides said the EU must be “conscientious, resolute and credible” in its actions and must pursue a leading role on issues that relate to its member states' sovereign rights.

“It's clear that the ball is in Turkey's court and any decisions depend on Turkey's attitude which (EU) leaders will evaluate and make decisions accordingly, as they agreed in October,” he said.