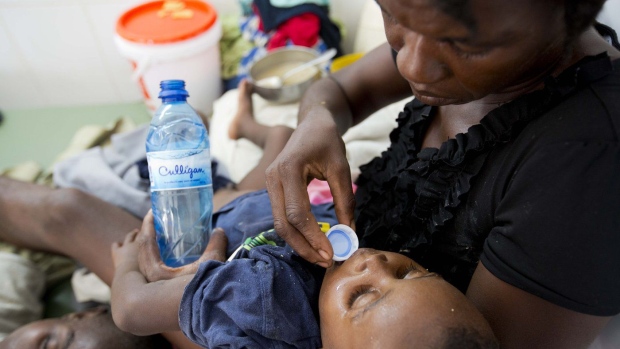 FILE - A boy diagnosed with cholera receives treatment at a cholera center in Anse D'Hainault, Haiti, Tuesday, Oct. 11, 2016. Haiti’s government on Sunday, Oct. 2, 2022, announced that at least eight people have died from cholera for the first time in three years, raising concerns about another potential catastrophic epidemic like the one that broke out a decade ago and killed nearly 10,000 people. (AP Photo/Dieu Nalio Chery, File)

PORT-AU-PRINCE, Haiti (AP) - Haiti's government on Sunday announced that at least eight people have died from cholera, raising concerns about another potentially catastrophic epidemic like the one that broke out a decade ago and killed nearly 10,000 people.

The cases - the first cholera deaths reported in three years - came in a community called Dekayet in southern Port-au-Prince and in the gang-controlled seaside slum of Cite de Soleil, where thousands of people live in cramped, unsanitary conditions.

Food or water contaminated with the cholera bacteria can lead to severe diarrhea and dehydration that can be deadly.

The United Nations said in a statement that it is working with Haiti's government to “mount an emergency response to this potential outbreak,” stressing that health teams need to be guaranteed safe access to areas where cases have been reported.

The deaths come as a lack of fuel and ongoing protests shut down the availability of basic services across Haiti, including medical care and clean water, which is key to helping fight cholera and keep patients alive.

Haiti's most powerful gang continues to control the entrance to a main fuel terminal in the capital of Port-au-Prince, leading to a lack of fuel amid soaring prices that have unleashed widespread protests that have paralyzed the country for more than two weeks.

The absence of fuel and increasing number of roadblocks have prevented water trucks from visiting neighborhoods to provide potable water to those who can afford it. It also has prompted some companies to temporarily shut down operations.

On Sunday, Caribbean Bottling Company said it could no longer produce or distribute potable water because its diesel reserves were “completely depleted,” adding that the lack of such a vital resource would affect “all sectors of society.”

Adrien said health officials were trying to visit communities where cholera has been reported, but that his agency, too, has been affected by a lack of fuel as he called on people blocking the gas terminal and organizing protests to “have a conscience.”

“This is a real problem,” he said of how the country has virtually been paralyzed. “We're hoping this will not spread.”

Adrien noted that all those who died were unable to reach a hospital in time.

Haiti Health Minister Alex Larsen said people have a right to protest but asked Haitians to allow potable water supplies into neighborhoods that have been cut off by roadblocks and protests.

“Water has not been in these areas for a long time, and people are not drinking treated water,” he said, adding that cholera cases could spike again. “We ask people who can afford it to add a little chlorine to the water.”

Haiti's last cholera epidemic sickened more than 850,000 people in a country of more than 11 million, marking one of the world's worst outbreaks of the preventable disease in recent history.

United Nations peacekeepers from Nepal were blamed for introducing cholera into Haiti's largest river in October 2010 by sewage. The U.N. has since acknowledged it played a role in the epidemic and that is has not done enough to help fight it, but it has not specifically said it introduced the disease.

Haiti would have been declared cholera-free by the World Health Organization only after reaching three consecutive years with no new cases.