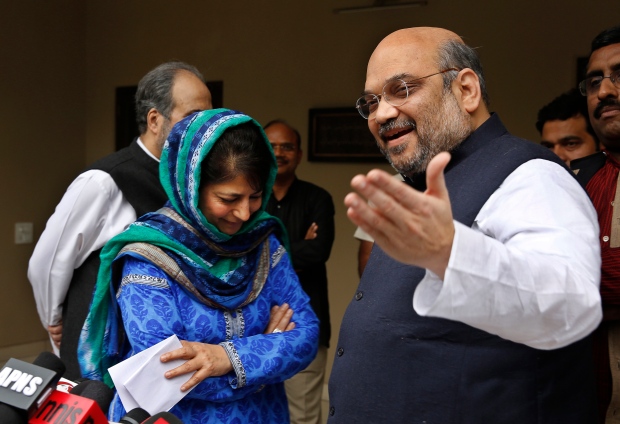 SRINAGAR, India -- India's ruling Hindu nationalist party formed a coalition government in Kashmir on Sunday, marking the first time it will hold a leadership position in the disputed Muslim-majority region.

Leaders from the ruling Bharatiya Janata Party and the Peoples Democratic Party were sworn into office in the state's winter capital of Jammu amid tight security in a ceremony attended by Prime Minister Narendra Modi.

PDP leader Mufti Mohammed Sayeed will be the region's chief minister and the BJP a junior partner in the new government.

No single party managed to win a clear majority needed to form a government in Jammu and Kashmir state during the elections, which took place in several phases in November and December.

The PDP emerged as the single-largest party with 28 seats in the region's 87-strong state legislature, while the BJP got 25 seats -- all in Hindu-dominated districts.

Sayeed and Modi finalized the deal at a meeting in New Delhi after prolonged and difficult negotiations. The two parties hold diametrically opposite views on several issues, such as laws that exclude Indian military personnel from criminal prosecution the violence-wracked Himalayan region. The PDP wants the Draconian laws scrapped, but the BJP supports the army's presence.

Traditionally, the BJP has also opposed a special constitutional status for Kashmir, which allows the region to make its own laws, while regional parties including the PDP defend it.

Mirwaiz Umar Farooq, a top Kashmiri separatist leader, said that "it hardly matters which party is in power in Kashmir, as India has been ruling here through its proxies."

"The fact remains that decisions related to Kashmir are always taken by the security establishment, which is under New Delhi's direct control," Farooq said.

India and Pakistan have fought two wars over Kashmir, which is divided between the neighbours but claimed by both in its entirety.

Since 1989, rebel groups have been fighting against Indian rule. More than 68,000 people have been killed in the rebel uprising and a subsequent Indian military crackdown.

Incidents of violence have largely been suppressed by Indian forces. However, public opposition to Indian rule remains deep and in recent years has found expression in street protests marked by youths hurling stones at security forces.