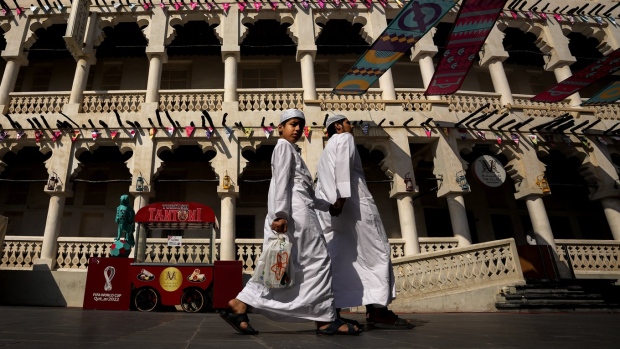 A man and a boy walk at the Souq Waqif market in Doha, Qatar on Sunday, December 4, 2022. Qatar has been no ordinary FIFA World Cup. More like a one-of-a-kind tournament in a one-of-a-kind country. With eight stadiums within one hour of each, either in or around Doha, the men’s soccer showcase is a far cry from previous editions spread across one country or more. THE CANADIAN PRESS/Nathan Denette

With eight stadiums within one hour of each, either in or around Doha, the men's soccer showcase is a far cry from previous editions spread across one country or more. The commute for fans and those covering the event is short and sweet.

With oil-rich Qatar funding a reported US$200-billion bill, it's literally the best tournament money could buy.

The main media centre in the Qatar National Convention Centre, a sprawling modern space that covers 200,000 square metres, comes with world-class art with a price tag to match. Sandwiched between a McCafe and assorted help desks is Louise Bourgeois' "Maman," a giant spider sculpture — a version of which sold for US$32.1 million by Christie's in 2019.

The venues are equally impressive — brand spanking new, their lush pitches a marvel in the desert, and with air conditioning lowering 25-degree evening temperatures by a couple of degrees despite roofs open to the elements.

Those facilities came at a different kind of cost, with Amnesty International dubbing it "Qatar World Cup of Shame" over the exploitation of migrant workers tasked with building the infrastructure needed to stage the event. Qatar's strict laws banning homosexuality understandably also drew fire from outside its borders.

As competing teams tried to formulate a diplomatic response to such as guests, Qatar essentially ignored the outcry and went about its business.

For visitors, the desert country comes in a limited colour palate.

Homes are a uniform sandy beige. The vast majority of vehicles are white, presumably to help deal with the heat.

In the Doha suburbs, there are clusters of cookie-cutter townhouses and villas complete with parking spaces topped by metal awnings to stop cars underneath from turning into ovens with wheels. Toyota Land Cruisers seem a vehicle of choice.

Mixed in are eye-popping mansions — fenced in palaces with enough parking to accommodate a football team. Often such mega-homes border on major thoroughfares, perhaps combining easy access with an unabashedly ostentatious show of wealth.

In downtown Doha, the architecture is sweeping and grandiose. There are wide thoroughfares flanked by buildings of beauty. The country clearly has a plan — and the money to execute it.

On the surface, growing up a Qatari appears akin to hitting the lottery, with the government taking care of its own.

Qatar is home to some 2.9 million people, but only around one in 10 are Qatari citizens. They get free health care and higher education, high-paying government jobs and tax-free incomes, housing support and generous subsidies, among other perks.

The day-to-day work needed to run a country is essentially done by foreigners, many of whom seem only too willing to take the paycheque a long way from home.

While the extensive buffet line — run by a worldwide hotel chain — at the tournament's main media centre is hardly a representative sample, the array of cheerful servers from the likes of India, Kenya, Lebanon, South Africa, Turkey and Zimbabwe seem driven by the chance to secure jobs here after the tournament.

Within days of arriving, the regular call to prayer became a beautiful and haunting soundtrack to your stay.

Highway driving in Qatar has proved to be equally memorable, but in a white-knuckle, grit-your-teeth kind of way.

Using indicators is apparently optional while changing lanes in Qatar. Instead size matters, with some drivers in larger vehicles content to bully their way to where they want to go.

At two riyals (75 cents) a litre, no one is watching their speed or gas consumption.

And forget the bumper sticker that reads "if you can read this, you are too close." Highway driving here seems more often than not a high-speed version of tag, sometimes with your Uber driver cheerfully making eye contact as he chats with his front-seat passenger while seemingly trying to touch the bumper ahead of him.

Prayer beads should be issued to anyone circling a Qatari roundabout as cars enter and exit as if escaping from the earth's gravity.

But in residential areas, speed is controlled with chunky traffic bumps that would slow a tank. Neighbourhoods come with family parks that are off-limits unless you show up with a family.

The buses transporting media were rarely filled other than game-day trips to stadiums. And the drivers, also imports, began to let their character show as the tournament wore on.

My favourite was the young driver with a penchant for Kenny Rogers, his music of choice for two shared rides. Never thought I'd be listening to "The Gambler" and "Islands in the Stream" while navigating Doha.

Locals went about their business during the World Cup, with men in white thobes and women covered all in black strolling alongside fans from around the world in shorts and T-shirts under the hot sun at the Souq Waqif market. Pretty much everything was tolerated, short of photographing local women — a clear no-no.

The heat was fierce at midday but Doha was a delight in the evening, with a pleasant cool breeze. The people were equally welcoming.

Qatar has delivery down pat with fleets of motorcyclists willing and able to deliver everything from groceries to takeout food. And the smallest of tips always evokes the biggest of smiles.

The Pearl, a man-made island, is a Vegas-like over-the-top oasis that offers everything from a surprise Tim Hortons to a Rolls-Royce dealership. The wealth on display in staggering, with a line of Lamborghinis parked outside one luxury highrise.

Luxury yachts are stacked side by side, each outdoing the other with the gunmetal-grey Attila, a 64.3-metre behemoth, currently dwarfing the competition. According to Boat International magazine, more than 20 super yachts — including some of the biggest in the world have docked in Doha for the World Cup.

It's clear Qatar comes in many different models, depending on your passport.

There is one version for the Qataris and another for visiting workers. And yet another for tourists and ex-pats, who can drink $20 beers, hit the luxury boutiques and swim in the posh pools of local hotels away from the locals and their workforce.

"A window to the past — and a glimpse into the future, all under the umbrella of that famous Arabian hospitality," according to Visit Qatar.

Certainly a view to remember.