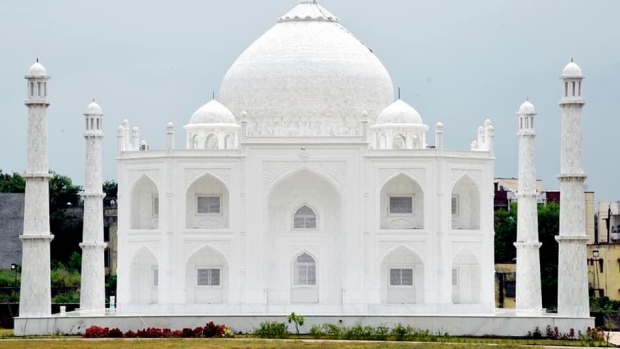 This undated photograph provided by Indian businessman Anand Prakash Chouksey shows a house resembling India's iconic Taj Mahal monument built by Chouksey as a residence for him and his wife to live in at Burhanpur, Madhya Pradesh, India. Constructed with white marble procured from Makrana, a city in Rajasthan state and the same place that gave the Taj Mahal its marble, the smaller imitation embodies several aspects of the real monument, including the large dome, intricate minarets and even artwork seen on the original. ( Anand Prakash Chouksey via AP)

NEW DELHI - An Indian man has built a one-third sized replica of the historic Taj Mahal for his wife, but unlike the original, it's their residence, not a mausoleum.

Constructed with white marble from the same city that provided the Taj Mahal's stone, the imitation includes the real monument's large dome, intricate minarets and even some of its artwork.

The famed 17th century Taj Mahal, often called a monument to love, was built by a Mughal emperor in memory of his favorite wife.

She died in Burhanpur, the site of the newly built replica, while giving birth to their fourteenth child.