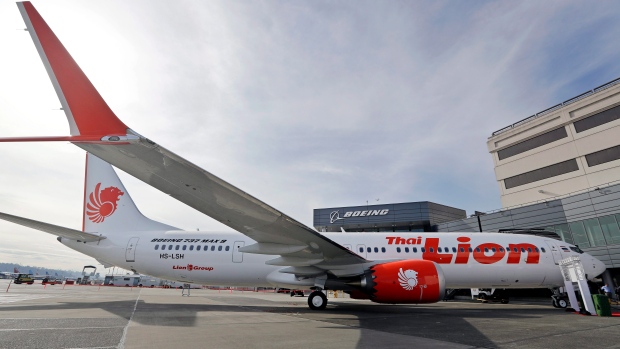 Boeing's first 737 MAX 9 jet is parked at the company's delivery center before a ceremony transferring ownership to Thai Lion Air, Wednesday, March 21, 2018, in Seattle. It is expected that the larger capacity airplane will help the airline launch several international routes. (AP Photo/Elaine Thompson)

JAKARTA, Indonesia -- Indonesia's Lion Air said Monday it has lost contact with a passenger jet flying from Jakarta to an island off Sumatra.

A search and rescue effort has been launched for the Boeing 737-800 plane which departed Jakarta about 6.20 a.m. for Pangkal Pinang.

"We can confirm that one of our flights has lost contact," said Lion Air spokesman Danang Mandala Prihantoro. "Its position cannot be ascertained yet."

A telegram from the National Search and Rescue Agency to the air force has requested assistance with the search of a location at sea off Java.

Lion Air is one of Indonesia's youngest and biggest airlines, flying to dozens of domestic and international destinations.

In 2013, one of its Boeing 737-800 jets missed the runway while landing on the resort island of Bali, crashing into the sea without causing any fatalities among the 108 people on board.