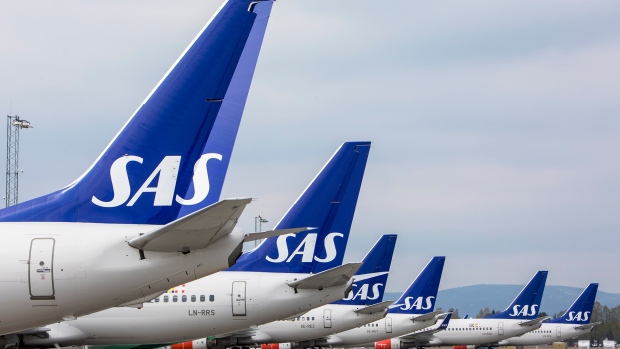 (CNN) -- Some international airlines have started to avoid Belarus air space after a Ryanair flight from Greece to Lithuania was forced to land in the country, and a dissident journalist on board was arrested.

Scandinavian Airlines (SAS) said in a statement on Monday that it will reroute its twice weekly flights between Oslo and Kiev, the capitals of Norway and Ukraine, in line with instructions from the Swedish Transport Agency.

"Safety is always our highest priority. We follow the development closely and are in close contact with Scandinavian and European aviation authorities and follow their instructions," SAS added.

Earlier on Monday, Latvia's flag carrier AirBaltic said it had "decided to avoid entering Belarus airspace until the situation becomes clearer or a decision is issued by the authorities." Cyprus-registered Avia Solutions Group also said its airlinesbased in the Baltic region will not be using Belarusian airspace.

Carriers and aviation authorities are concerned about safety after Ryanair flight 4978 was ordered to divert to Minsk by Belarusian air traffic control on Sunday over a supposed security alert. Ryanair CEO Michael O'Leary on Monday accused Belarus of "state-sponsored hijacking, state-sponsored piracy."

The Ryanair flight was about to begin its descent to Vilnius in Lithuania when it suddenly changed direction, turning sharply east and descending towards the Belarusian capital.

One of the passengers on the aircraft was Belarusian journalist and opposition activist Roman Pratasevich, who was arrested as soon as the plane landed, according to the Belarus Interior Ministry.

"It appears the intent of the authorities was to remove a journalist and his traveling companion," O'Leary told Ireland radio station Newstalk. He said Belarusian secret securityagents were also on board the flight, which had taken off from Athens.

US Transportation Secretary Pete Buttigieg said Monday that the US government was assessing whether American airlines were safe flying over Belarus airspace. "We, both in terms of the international bodies we're part of and as an administration with the FAA [Federal Aviation Administration] are looking at that," he told CNN's John Berman.

Willie Walsh, the director general of the International Air Transport Association (IATA) and former CEO of British Airways' parent company IAG, told CNN he couldn't recall an incident like this in his career.

"We strongly condemn the actions of the government of Belarus in intercepting this flight and forcing it to land," he told CNN's Becky Anderson. "It clearly was an extremely dangerous action by the government. It put the crew of the Ryanair aircraft in a very difficult situation."

"The information that's available to us certainly suggests that this was an unlawful act taken to interfere with the proper operation of a civil passenger aircraft," Walsh added.

Walsh said it was up to individual airlines and pilots to decide whether to fly over Belarus, but he suspected that more airlines would look to avoid the airspace as "more information becomes available."

He also warned that diverting around Belarusian airspace could itself lead to other risks as a number of areas, particularly in the case of Eastern Ukraine, are already avoided by airlines.

Germany's Lufthansa and Dutch carrier KLM told CNN Business that they continue to operate flights to and from Belarus as normal. "We are currently using the airspace over Belarus regularly," a Lufthansa spokesperson said.