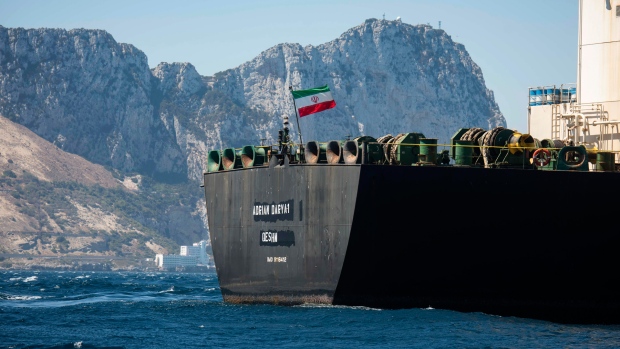 MADRID - An Iranian supertanker with $130 million worth of light crude oil that the U.S. suspects is tied to a sanctioned organization has left Gibraltar and was heading Monday east into the Mediterranean Sea, with its next destination reported to be Greece.

The Iran-flagged Adrian Darya 1, previously named Grace 1, set course for Kalamata, Greece, with an estimated arrival on Aug. 25, according to ship tracking service MarineTraffic. It wasn't immediately clear why the tanker would be heading there or whether the destination could change.

The vessel left Gibraltar late on Sunday after having been detained for a month in the British overseas territory for allegedly attempting to breach European Union sanctions on Syria. Gibraltar authorities rejected attempts by the U.S. to seize the oil tanker again, arguing that EU regulations are less strict than U.S. sanctions on Iran.

Gibraltar said it had been assured by Iran that the tanker wouldn't unload its cargo in Syria.

Iranian government officials have yet to publicly acknowledge the ship's next destination, or where it will discharge its cargo of 2.1 million barrels of crude oil. Iran has denied it was ever headed for Syria.

The tanker's release comes amid a growing confrontation between Iran and the West after President Donald Trump pulled Washington out of Tehran's nuclear deal with world powers over a year ago.

Shortly after the tanker's detention in early July, Iran seized the British-flagged oil tanker Stena Impero, which remains held by the Islamic republic. Analysts had said the Iranian ship's release by Gibraltar might mean that the Stena Impero could go free.

But Iranian officials denied there was any link between the two ships.

“There is no specific relation between these two ships,” Foreign Ministry spokesman Abbas Mousavi said of the Stena Impero and the Adrian Darya 1. “We are glad that our stance about the unlawful and illegal seizure of our tanker has been proven.”

“Regarding the release of the law-breaking British tanker (Stena Impero), we have to wait for the court's ruling,” he added. “This tanker has committed two to three nautical violations that are being investigated. We hope that these investigations will finish as soon as possible and a verdict will be issued and if the verdict orders its release, it can continue to sail its path.”

In a last-ditch effort to stop the release, the U.S. unsealed a warrant Friday to seize the Adrian Darya 1 and its cargo, citing violations of U.S. sanctions as well as money laundering and terrorism statutes.

U.S. officials told reporters that the oil aboard the ship was worth some $130 million and that it was destined for a designated terror organization.

The unsealed court documents argued that Iran's Islamic Revolutionary Guard Corps are the ship's true owners through a network of front companies.

Authorities in Gibraltar said Sunday that, unlike in the U.S., the Iran's Revolutionary Guard is not designated a terrorist organization under EU, U.K. or Gibraltar law.

The Iranian spokesman warned Monday against any order by the U.S. Justice Department to have the renamed ship seized again.

“If such an action is taken or even if it is stated verbally and not done, it is considered a threat against the maritime security in international waters,” said Mousavi. “The Islamic Republic of Iran has given necessary warnings to the U.S. officials through official channels, especially the Swiss Embassy in Tehran, not to commit such a mistake which (could) bring them severe consequences.”

The Iranian ship was detained while sailing under a Panamanian flag with the name Grace 1. It changed the name on Sunday and hoisted an Iranian flag.