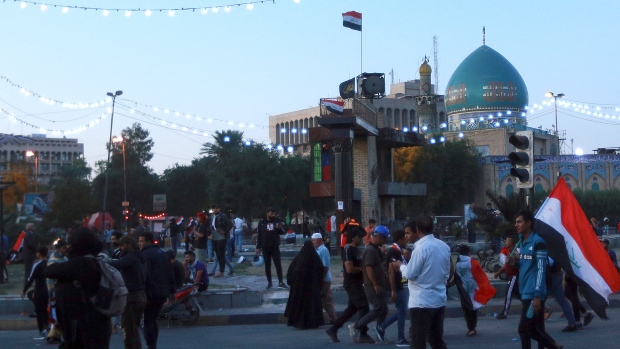 People walk at the Khilani Square after protesters took its control and reopened it after the clashes between Iraqi security forces and anti-government demonstrators in Baghdad, Iraq, Saturday, Nov. 16, 2019. (AP Photo/Hadi Mizban)

BAGHDAD - Anti-government protesters seized control of a strategic square in central Baghdad on Saturday, as they inched closer toward their goal of reaching the heavily fortified Green Zone, the seat of government, after days of violent clashes with security forces.

An activist involved in the protest movement was shot dead early in the morning, security officials and activists said, in northwest Baghdad. The officials requested anonymity in line with regulations.

At least 320 have been killed and thousands wounded since the unrest in the capital and the mostly Shiite southern provinces began on Oct. 1. Protesters have taken to the streets in the tens of thousands over what they say is widespread corruption, lack of job opportunities and poor basic services despite the country's oil wealth.

Iraqi security forces withdrew from Khilani Square and part of Sinak Bridge on Saturday, after firing live rounds and heavy tear gas the previous day against protesters trying to tear down a concrete barrier blocking entry to the square.

Security forces kept control over part of the Sinak Bridge and erected new concrete barriers to block protesters from pushing into the Green Zone, which houses Parliament and many foreign embassies.

Protesters took control of a five-story parking garage adjacent to the bridge, giving them a bird's eye view over the Green Zone and the street below, mirroring tactics employed in Tahrir Square, where they occupied an iconic 14-story Saddam Hussein-era building that has become a reference point for demonstrators.

Protesters have sought to cross the flashpoint Jumhouriyya and Sinak bridges to get to the Green Zone and failed every time as riot police stationed on the bridges held them off with tear gas and stun grenades.

But along with Tahrir, the hub of the protest movement, demonstrators now control two central plazas with direct access to the Green Zone.

Demonstrators also set up checkpoints on the road leading to Tahrir Square and organized their own civilian security in the area, after a deadly car bombing the previous night. The Associated Press witnessed young men conducting body checks and inspecting bags at entry points to the area.

A roadside bomb killed three people and wounded 18 late Friday near the main square. The blast, which damaged several cars in the area, occurred between Tayaran and Tahrir squares. Another roadside blast in the southern city of Nassiriya wounded 18 people that same evening.

Anti-government activist Adnan Rustom, known to be active on social media in support of the protest movement, was shot dead by unknown assailants in the al-Hurriya neighbourhood on Saturday morning, according to security and activist officials.

Rustom was an employee in the Education Ministry, an activist said.

The leaderless, mass protests aim to sweep aside Iraq's sectarian system imposed after the 2003 U.S. invasion and its entire political elite.