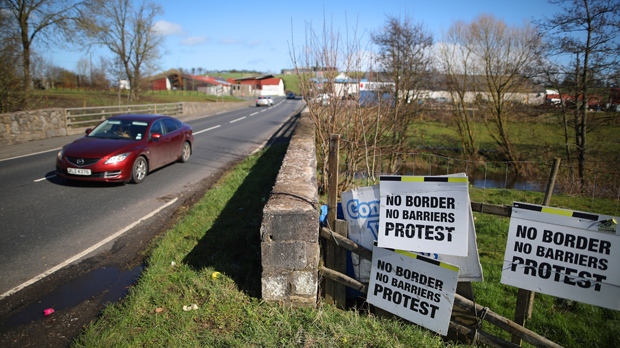 In this file photo dated Tuesday, March, 12, 2019, a Motorist crosses the Irish border in Middletown, Northern Ireland. The hope of Britain's Brexit split from the European Union depends on finding a political solution to avoid having a hard border across the peaceful green fields that span the seamless border dividing Britain's Northern Ireland from Europe's Republic of Ireland. (AP Photo/Peter Morrison, FILE)

DUNDALK, Ireland -- Irish republicans are expressing renewed hopes of reunifying their island in the wake of the U.K.'s recent Brexit proposals, seeing that as a solution to the problems that Britain's departure from the European Union is bringing.

What to do about the border between the Republic of Ireland and the U.K.'s Northern Ireland has been the biggest stumbling block in Britain's attempts to negotiate a departure deal with the EU. The biggest fear for many on both sides of the border is that a customs posts could spring up, threatening both the economy and the fragile peace process.

Making Northern Ireland part of the republic would be one way to solve that problem.

“There is going to be a referendum on Irish unity,” said Gerry Adams, the retired leader of Sinn Fein who played an important role in reaching the 1998 Good Friday agreement that helped end decades of violence. “Brexit has been the accelerator for all of that.”

Adams spoke to a public meeting Thursday night that attracted hundreds of people living along the border despite the severe weather caused by the remnants of Hurricane Lorenzo.

While farmers, tradesmen and local Sinn Fein supporters listened politely to the panel of campaigners, politicians and experts, their own questions were much more pragmatic: Will my southern driving license still be valid in the north? Will I need a residence permit to live in the south? Will my child residing in the north still be able to attend the local school in the south?

There have been few clear answers.

Speaking earlier in the day in Stockholm, Irish Prime Minister Leo Varadkar outlined five ways to avoid a border between Northern Ireland and the Republic of Ireland - the first being a united Ireland.

This would be possible under the terms of the Good Friday agreement that brought an end to decades of fighting in Northern Ireland between armed factions of republicans and unionists.

The landmark agreement, which some European leaders believe is threatened by Brexit, states that Ireland can be united if residents of Northern Ireland vote in favour of it, and if residents of the Republic of Ireland do the same.

Despite Sinn Fein's longstanding desire for a united Ireland, which was the rallying cry of the Irish Republican Army during the violence known as “The Troubles,” a majority of residents in Northern Ireland are still believed to favour remaining part of the UK, and a referendum will only be held if officials believe that situation has changed.

Farmer and activist Damian McGenity from Border Communities Against Brexit, believes the U.K. government's new proposals were not intended to be accepted, but rather would be used to blame the European Union for an anticipated breakdown in talks.

He said many people living along the border who rely on access to the European Union would see unification as an obvious fix to an apparently unsolvable problem.

“We have a provision in the Good Friday agreement that if Ireland was united we would automatically be a member of the European Union,” said McGenity. “And that solves all of the problems that this part of Ireland has with Brexit.”