IS militants in Syria seize ex-army base, villages near Aleppo 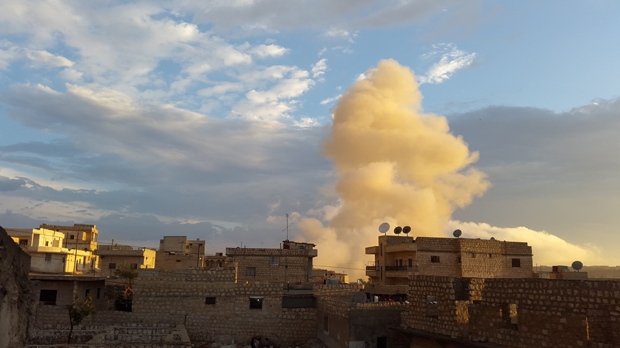 Air strikes launched by the Russian regime struck Daret Ezza, Aleppo, Syria the morning of October 7, 2015. The blast hit a residential area, killing a mother, Guerets Bazaar, and her two children, 10-year-old Talal Bazaar and 12-year-old Safaa Bazaar. Daret Ezza is home to many civilians, our contributor on the ground reports there is no ISIS presence in the area and region is controlled by the moderate Syrian opposition. (ALAA ABDULRAHMAN/Newzulu.com)

BEIRUT -- Islamic State militants captured a string of villages near Aleppo on Friday in a lightning attack that brought them closer to the prized city in northern Syria, despite a major increase in Russian airstrikes that Moscow insists are targeting the extremists.

The surprise advance that brought the IS group to within a few miles of Aleppo was the most significant in months, following what has largely been a summer of stalemate in the war against the extremists.

It comes amid a wave of intense Russian airstrikes that have targeted insurgents fighting to topple President Bashar Assad, and a ground offensive by the Syrian army in the country's central region.

Moscow says it is targeting mainly Islamic State militants, but U.S. officials and Syrian rebels have said the strikes have hit mainstream rebels for the most part and are aimed at shoring up Assad's embattled government and troops. Many of the rebel groups hit by the Russian strikes are also at war with the IS group.

He said the Russians have not carried out attacks against IS in Aleppo, which is split between government forces and various insurgent groups. "They are trying to finish off the rebels," he said.

Other activists wondered where the Americans were.

He said the strikes killed 100 militants and destroyed an ammunition dump near Aleppo.

"Militants are sustaining substantial losses under the Russian airstrikes and are having to change their tactics, to scatter their forces, to carefully disguise themselves and hide in settlement," he said.

An international human rights group said Friday that apparent Russian airstrikes on the central town of Talbiseh on Sept. 30 killed at least 17 civilians and wounded 72, adding that the incident should be investigated for possible violations of the laws of war.

Human Rights Watch said local groups operating in the central Homs province said that jets that they believed were Russian conducted strikes on the neighbouring towns of Zaafaraneh and Rastan, killing another 17 civilians. HRW said it is still investigating the two attacks.

The Observatory said the extremists' surprise advance north of Aleppo, which began Thursday night, is the most significant in months. It said the militants seized the villages of Tal Qrah, Tal Sousin and Kfar Qares north of Aleppo, Syria's largest city and its onetime commercial capital.

The group also seized a former army base known as the Infantry Academy that rebels captured from the Syrian army two years ago. The base is located around 10 miles (16 kilometres) northeast of Aleppo city and about one mile (1.6 kilometres) away from a government-held industrial zone on the northern edge of Aleppo.

The areas were seized from hard-line and mainstream rebel groups, including the ultra-conservative Ahrar al-Sham and the Levantine Front.

The advance highlighted the rapidly shifting terrain in Syria, where Russia and the United States are launching airstrikes and lending support to opposite sides in the country's nearly five-year civil war.

The pro-IS Aamaq media outlet said the group seized six villages and other strategic positions in Aleppo province after battling armed opposition groups there. It said the group opened its blitz with a surprise attack on the Infantry Academy, forcing rebels to withdraw after a number of their fighters were killed or captured.

It said militants then continued their advance toward nearby villages, killing and wounding rebels and seizing "qualitative weapons and ammunition" from them along the way.

Some opposition activists said the Islamic State group took advantage of Russian airstrikes and the rebels' preoccupation with fighting Syrian troops on other fronts in central Syria.

"At a time when the rebels are waging fierce battles against the Russian occupiers in Hama countryside, Daesh seizes the Infantry Academy and a number of villages in Aleppo," said Hadi Abdullah, an activist with close links to the Army of Conquest, a coalition that includes mainstream rebels as well as al-Qaida's affiliate, the Nusra Front.

The Army of Conquest, which had made a string of advances against government troops in recent months, has come under attack from Russian warplanes.

In Tehran, state media reported that a senior commander in Iran's powerful Revolutionary Guard was killed by the Islamic State group on the outskirts of Aleppo city, but it was not immediately clear whether Gen. Hossein Hamedani's death was related to the new IS offensive.

An Iranian state television report said he was killed while "carrying out an advisory mission," and the official IRNA news agency read a statement by the Guard in which it blamed IS for his death. Neither report provided further details.

Abdurrahman said he was killed on the edge of the Kweiras military airbase, which the IS group has besieged for months. Syrian troops launched an offensive last week in an attempt to break the siege.

Kweiras base is about 31 miles (50 kilometres) away from the area of the IS offensive.

Hamedani is one of the most senior Guard commanders to be killed in Syria, and the second to be killed this year. He was a veteran commander who had an important role in Iran's 1980-88 war with Iraq and was among top Iranian commanders co-ordinating fighting in Syria. Hamedani was also reportedly in charge of organizing and commanding the various Iranian-backed Shiite militias fighting alongside Assad's forces.

Shiite powerhouse Iran is one of Assad's main allies. Tehran has provided his government with military and political backing for years and has kept up its support since Syria's civil war began in 2011.

Guard commanders repeatedly have said Iran only has high-level advisers in Syria, denying it has fighters there.