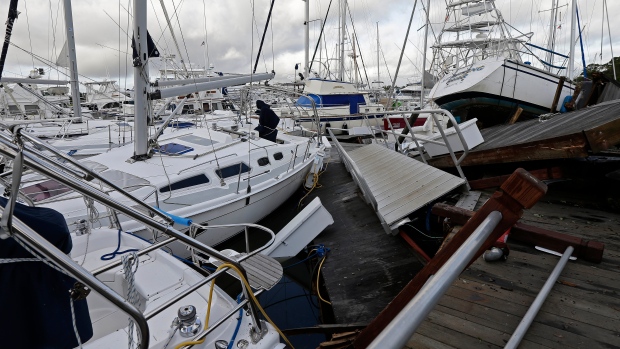 Boats are piled on each other in the marina following the effects of Hurricane Isaias in Southport, N.C., Tuesday, Aug. 4, 2020. (AP Photo/Gerry Broome)

SOUTHPORT, N.C. - Tropical Storm Isaias spawned tornadoes and dumped rain along the U.S. East Coast on Tuesday after making landfall as a hurricane in North Carolina, where it smashed boats together and caused floods and fires that displaced dozens of people. At least two people were killed when one of its twisters hit a mobile home park.

“Potentially life-threatening urban flooding is possible in D.C., Baltimore and elsewhere along and just west of the I-95 corridor today,” the National Hurricane Center warned.

Nevertheless, some veterans of earlier storms were under the impression that their areas would be spared.

Royce Potter, a fifth-generation seafood purveyor and owner of Potter's Seafood in Southport, said he rode out the storm on a boat docked near his business, which was damaged by the wind and water.

“They got this wrong,” Potter said, visibly shaken. “I've ridden storms out here for years.”

The storm surge and wind damage actually matched what the hurricane centre predicted, leaving dozens of boats piled up against the docks and many decks facing the water smashed.

“The water was crazy; the wind was up. The waves were coming up over the pier out there and people were walking, and we were scared for them,” he said.

Burris says a group of people were standing on Sea Cabin Pier taking photos but took off running for land just moments before a portion collapsed from the strength of the storm.

“Next thing you know, the water kept getting higher and higher. It overtook the pier and I'm shocked it's still standing.”

Two people were killed and at least three others were unaccounted for after a tornado destroyed several mobile homes in Windsor, North Carolina, said Ron Wesson, the chairman of the Bertie County Board of Commissioners. He said as many as 15 others were taken to hospitals with injuries.

An aerial shot by WRAL-TV showed fields of debris where rescue workers in brightly colored shirts picked through splintered boards and other wreckage. Nearby, a vehicle was flipped onto its roof, its tires pointed up in the air.

“It doesn't look real. It looks like something on TV. Nothing is there,” Bertie County Sheriff John Holley told reporters. “All my officers are down there at this time. Pretty much the entire trailer park is gone.”

Forecasters expected the storm to hold its strength and spin off damaging winds on a path into New England on Tuesday night.

“We don't think there is going to be a whole lot of weakening. We still think there's going to be very strong and gusty winds that will affect much of the mid-Atlantic and the Northeast over the next day or two,” hurricane specialist Robbie Berg told The Associated Press.

As the rains grew stronger and steadier in the Philadelphia area Tuesday, emergency responders rescued a few people trapped in vehicles when roads suddenly became flooded and mostly impassable. No injuries were reported.

Isaias toggled between tropical storm and hurricane through its path to the U.S. coast, killing two people in the Caribbean and trashing the Bahamas before brushing past Florida.

Most of the significant damage seemed to be east and north of where the hurricane's eye struck land.

Gov. Roy Cooper said Tuesday morning that Brunswick, Pender and Onslow counties, along North Carolina's southeast coast, were among the hardest hit with storm surge, structure fires and reports of tornadoes. About two dozen shelters were open, he said.

Eileen and David Hubler were out early Tuesday cleaning up in North Myrtle Beach, where the storm surge topped 4 feet (1.2 metres), flooding cars, unhinging docks and etching a water line into the side of their home.

“When the water started coming, it did not stop,” she said. They had moved most items of value to their second floor, but a mattress and washing machine were unexpected storm casualties. Eileen Hubler said Isaias' incoming wrath was downplayed, and she wishes she had followed her gut.

“We keep thinking we've learned our lesson. And each time there's a hurricane, we learn a new lesson. The new lesson is you never trust that you're going to have a 2-foot (0.6 metre) storm surge,” she said.

Coastal shops and restaurants had closed early in the Carolinas, where power began to flicker at oceanfront hotels and even the most adventurous of beachgoers abandoned the sand Monday night. The Hurricane Center warned residents to brace for storm surge up to 5 feet (1.5 metres) and up to 8 inches (20 centimetres) of rain in spots.

As the storm neared the shore, a gauge on a pier in Myrtle Beach recorded its third highest water level since it was set up in 1976. Only Hurricane Hugo in 1989 and Hurricane Matthew in 2016 pushed more salt water inland.