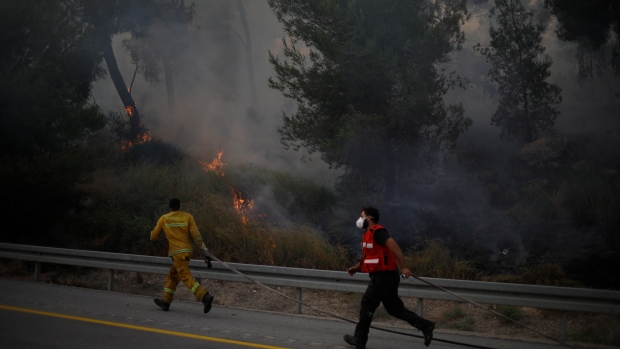 Fire fighters extinguish a forests fire near Kfar Uriya, Thursday, May 23, 2019. Israeli police have ordered the evacuation of several communities in southern and central Israel as wildfires rage amid a major heatwave. (AP Photo/Ariel Schalit)

JERUSALEM -- Israel is bracing for renewed wildfires amid a major heat wave that shows no signs of abating.

Thousands of people were evacuated from their homes on Thursday as fires raged, fueled by high temperatures and dry conditions.

The EU ambassador, Emanuele Giaufret, said Israel had asked for international help to combat the fires, and aid was arriving on Friday from Cyprus and Italy.

Plumes of smoke rose from hillsides in the country's centre and south as firefighters worked into the early hours to control the blaze.

The cause of the blaze remains unclear, but it erupted following the Jewish festival of Lag Ba'Omer, which observers mark with bonfires.

A sweltering heat wave is pushing temperatures in parts of the country up to 110 degrees Fahrenheit, or 43 Celsius.