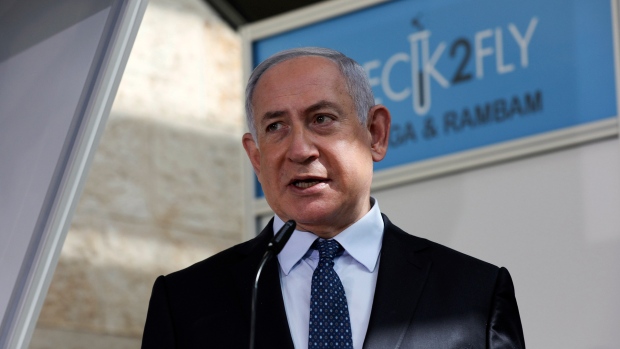 The reported meeting was the latest move by the Trump Administration to promote normalized ties between Israel and the broader Arab world and reflected the shared concern of all three nations about Iran.

The Israeli news site Walla, followed quickly by other Hebrew-language media, cited an unnamed Israeli official as saying that Netanyahu and Yossi Cohen, head of Israel's Mossad spy agency, flew to the Saudi city of Neom on Sunday, where they met with the crown prince. The prince was there for talks with visiting U.S. Secretary of State Mike Pompeo.

People travelling with Pompeo declined comment. Netanyahu, in a meeting with his Likud Party, also declined to explicitly confirm the visit.

“I have not addressed such things for years and I will not start with that now. For years I have spared no effort to strengthen Israel and expand the circle of peace,” he said.

“No such meeting occurred. The only officials present were American and Saudi,” he wrote. He did not elaborate.

The flight-tracking website FlightRadar24.com showed a Gulfstream IV private jet took off from Tel Aviv on Sunday night and flew south along the edge of Egypt's Sinai Peninsula before turning toward Neom and landing. The flight took off from Neom over three hours later and followed the same route back to Tel Aviv.

Pompeo, who was in Israel last week, travelled with a small group of American reporters on his trip throughout the Mideast, but left them at the Neom airport when he went into his visit with the crown prince.

While Bahrain, Sudan and the United Arab Emirates have reached deals under the Trump administration to normalize ties with Israel, Saudi Arabia so far has remained out of reach. The Trump administration, as well as Netanyahu, would love to add the Saudis to that list before it leaves office in January. In Sudan, a military official said an Israeli delegation was in the country on Monday to discuss the normalization efforts. He spoke on condition of anonymity because he was not authorized to discuss the visit with the media.

King Salman long has supported the Palestinians in their effort to secure an independent state as a condition for recognizing Israel. However, analysts and insiders suggest his 35-year-old son, Crown Prince Mohammed bin Salman, likely is more open to the idea of normalizing relations without major progress in the moribund peace process.

Israel and Saudi Arabia have a shared interest in countering archrival Iran, and they have welcomed the Trump administration's pressure campaign on the Iranians, which included withdrawing from the international nuclear deal with Iran and imposing tough economic sanctions on the Tehran government.

The reported meeting puts even more pressure on Iran ahead of an incoming Biden administration that has signalled a potential willingness to return to the 2015 nuclear deal.

“I think there's a message to Iran. Look, there's a front against you. There's two months to go to the new administration. Beware. We are on the same page,” said Yoel Guzansky, a senior fellow at the Institute for National Security Studies, a prestigious Israeli think-tank .

In an apparent message to President-elect Joe Biden, Netanyahu said in a speech Sunday evening, shortly before the reported trip to Saudi Arabia: “We must not return to the previous nuclear deal.”

In the same speech, Netanyahu also praised “trailblazing Arab leaders who understand the benefits of peace” and predicted “we will see other states that widen the circle of peace.”

In another possible reference to the Saudi meeting, a Netanyahu aide, Topaz Luk, accused Netanyahu's rival and coalition partner, Defence Minister Benny Gantz, of “playing politics at the same time that the prime minister is making peace.” Gantz on Sunday launched an investigation into Israel's purchase of German submarines - a scandal that has turned several close Netanyahu confidants into criminal suspects. Netanyahu himself is not a suspect.

It brought two world leaders to Neom, which he hopes will become a futuristic, skyline-studded Saudi version of Dubai that will offer the kingdom jobs and cement a future beyond its vast crude oil reserves. It also would reframe a rule so far colored by the killing of Washington Post columnist Jamal Khashoggi and the kingdom's grinding war in Yemen.

It was unclear where the three men met, though the Saudi royal family has massive mansions along the turquoise waters of the Red Sea, with a major golf course.

Netanyahu has long signalled back-channel relations with the Saudis, though the nations have never officially confirmed a meeting between their leaders. But Saudi Arabia appears to have given its blessing to the decisions of its Gulf neighbours, the UAE and Bahrain, to establish ties with Israel.

The kingdom approved the use of Saudi airspace for Israeli flights to the UAE. Bahrain normalizing ties also suggest at least a Saudi acquiescence to the idea, as the island kingdom relies on Riyadh.