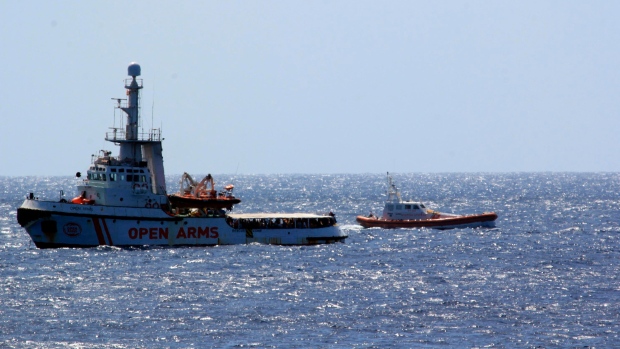 The Open Arms Spanish humanitarian boat with 147 migrants, left, is monitored by an Italian Coast guard vessel as it sails off the coasts of the Sicilian island of Lampedusa, southern Italy, Thursday, Aug. 15, 2019. A Spanish aid boat with 147 rescued migrants aboard is anchored off a southern Italian island as Italy's ministers spar over their fate. (Elio Desiderio/ANSA Via AP)

ROME -- A humanitarian boat carrying 147 migrants rescued at sea was anchored in choppy waters Thursday near a southern Italian island while the country's interior and defence ministers sparred over its fate, reflecting Italy's escalating political crisis.

Two weeks after rescuing migrants in the Mediterranean Sea off Libya, the Spanish rescue ship Open Arms entered Italian territorial waters after an Italian court overruled a ban on it by right-wing Interior Minister Matteo Salvini. He responded by renewing his ban against Open Arms entering Italian waters and docking at the island of Lampedusa to disembark its passengers, but Defence Minister Elisabetta Trenta refused to countersign it.

Trenta said she acted "listening to my conscience."

"We can't forget that behind the polemics of these days there are children and youths who suffered violence and every kind of abuse," she said in a statement explaining her refusal. "Politics can't lose humanity."

"Italians need a strong government, that doesn't allow timidity when the security and borders of the homeland are at stake," Salvini responded in a tweet.

The sharp squabbling between Salvini, who leads the anti-migrant League party, the populist government's junior partner, and Trenta, who is from the 5-Star Movement, the senior coalition party, reflects exploding political tensions that have put Prime Minister Giuseppe Conte's 14-month-old government on the verge of collapse.

Salvini says Italy has already received hundreds of thousands of migrants rescued at sea in recent years who have applied for asylum. He insists that other European Union nations accept more migrants, most of whom are fleeing poverty and aren't eligible for refugee status.

The Spanish government said it will take some of the migrants on the ship provided other European nations do so, too.

"Our country is ready to take part in a balanced distribution of the migrants aboard the ship," the office of caretaker Prime Minister Pedro Sanchez said.

Salvini's League stokes fears that migrants are to blame for crime and feeds resentment among his voter base against Brussels for its lack of solidarity, since EU rules hold that migrants must apply for asylum in the country where they set foot.

Salvini is openly campaigning to be Italy's next premier even though no new elections have been set. He seized upon the Open Arms stalemate, the latest in a series of standoffs, to blame Italy's migrant plight on the previous centre-left governments led by the Democratic Party (PD), now Parliament's biggest opposition force.

"It's thanks to this presumed concept of 'humanity' that in years of the PD governments that Italy became the refugee camp of Europe," Salvini said on Facebook.

Manoeuvring this week among Italy's political leaders has raised the possibility of the 5-Stars forging an alliance with the Democrats to thwart Salvini's quest for the premiership.

Salvini's League last week lodged a no-confidence vote against government, precipitating the country's political crisis. Conte, who will address the Senate on Tuesday, would be forced to resign if the non-confidence motion succeeds.

If any deal between the 5-Stars and the Democrats lines up enough support in Parliament for an alternative ruling coalition, Italy's president could hold off on dissolving Parliament and avoid a new election this fall.

Salvini has vowed to appeal the court ruling on the ship, but with Thursday a national holiday it was unclear if or when a decision could be made.

"One can't understand why an Italian judge can allow it to enter our waters" after the boat was previously in Maltese waters, Salvini tweeted.

Italian RAI state radio said two navy ships, which report to Trenta's ministry, are nearby to evacuate the children, a day after Conte asked Salvini to allow them to leave the ship.

Even as the fighting over Open Arms played out, another migrant rescue boat drama loomed.

The Ocean Viking, a Norwegian ship operated by Doctors Without Borders and SOS Mediterranee, was awaiting word where it can safely disembark 356 migrants who it plucked to safety from traffickers' unseaworthy boats. So far it has appealed to Italy and Malta in vain.

A UNICEF regional official urged immediate action to at least let the minors on the rescue boats land.

"It is unconscionable that once again politics have been prioritized over saving the lives of children who are stranded on the Mediterranean Sea," Afshan Khan said, noting that the two ships had 130 children and "only 11 of the 103 children aboard the Viking Ocean are accompanied by a parent or guardian."

The U.N. refugee agency has urged European governments to step forward and agree to take those stranded on the rescue boats.