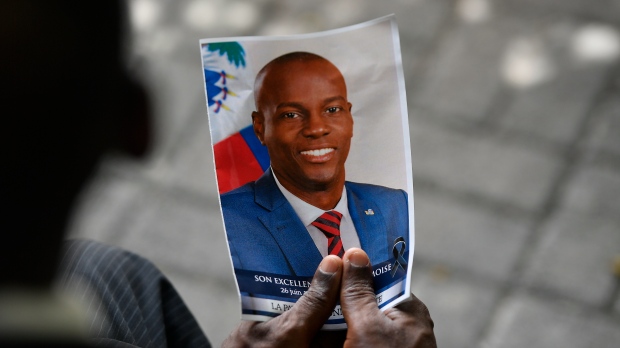 FILE - A person holds a photo of the late Haitian President Jovenel Moise during his memorial ceremony at the National Pantheon Museum in Port-au-Prince, Haiti, July 20, 2021. Haiti's National Police said Saturday, Jan. 15, 2022, that former Sen. John Joel Joseph, sought in the July 7 killing of Moise, has been arrested in Jamaica. (AP Photo/Matias Delacroix)

PORT-AU-PRINCE, Haiti (AP) - Haiti's National Police said Saturday that a former senator who is a prominent suspect in the July 7 killing of President Jovenel Moise has been arrested in Jamaica.

Meanwhile, Jamaica Police Superintendent Stephanie Lindsay told the AP that other people were arrested along with Joseph and that authorities were trying to determine whether they are family members. She said they were arrested before dawn on Saturday and declined to share other details.

“For more than one reason, we're not sharing more information,” she said.

Joseph is a Haitian politician and opponent of the Tet Kale party that Moise belonged to.

“One more suspect has been apprehended. One more opportunity to shed light on my husband's murder,” tweeted Martine Moise, who was injured in the shooting. “In Haiti or elsewhere, the tracking of the wanted must continue so that all the sponsors and perpetrators of this heinous crime are punished.”

A still-unreleased police report obtained by the AP quoted various sources as saying Joseph had several links to the attack, with at least one identifying him among the leaders of it.

The sources said Joseph paid in cash for rental cars used by the attackers and had met with other suspects ahead of the killing, including Christian Emmanuel Sanon, a Haitian businessman and evangelical pastor who had expressed desire to lead his country. Associates have suggested that Sanon was duped by the true masterminds of the assassination. He was arrested shortly after the killing.

The report also stated that the former senator introduced other suspects to Joseph Badio, an alleged leader of of the plot who previously worked for Haiti's Ministry of Justice and the government's anti-corruption unit until he was fired.

It said phone records show James Solages, a Haitian-American arrested in the case, had a WhatsApp conversation with Joseph regarding preparations for the mission. And it said that Solage told authorities that Joseph, Badio and Rodolphe Jaar - a Haitian citizen and former U.S. government informant arrested Jan. 7 in the Dominican Republic - were among those appointed leaders of the operation.

Badio remains a fugitive, while Dominican officials say Jaar was arrested there at the request of U.S. authorities.

“The arrest of John Joel Joseph shows that there will be no hiding place for those who are directly or indirectly involved in the assassination,” he wrote, saying that the international effort he initiated continues to bear fruit.

The 122-page police report said authorities visited at least three homes from July 10 to July 21 in efforts to track down John Joel Joseph, finding nothing except for four 12-gauge rifles, ammunition and firearms accessories in the first house that was under his name.

It's not immediately clear where the former Haitian senator arrested in Jamaica will be taken.

Claude Joseph, the former interim prime minister, said there is no extradition treaty between Haiti and Jamaica, but since the suspect is Haitian, he could be sent back to his native country.

John Joel Joseph is the second suspect to be arrested in Jamaica. In late October, Jamaican authorities arrested former Colombian soldier Mario Antonio Palacios Palacios, whom U.S. officials had interviewed while he was in hiding.

Palacios was recently extradited to the U.S. and was awaiting a court hearing after being charged with conspiracy to commit murder or kidnapping outside the United States and with providing material support resulting in death, knowing or intending that such material support would be used to prepare for or carry out the conspiracy to kill or kidnap.

More than 40 people, including 18 former Colombian soldiers, have been arrested in the killing of Moise, who was shot several times at his private residence in an attack that also injured his wife, Martine Moise.

Colombian government officials have said that the majority of former soldiers were duped and did not know about the real mission. The soldiers, who remain in prison in Haiti, have accused authorities of torture, while the Colombian government recently said the country's consul in Haiti was threatened after trying to provide humanitarian assistance.