Japan to make crater on asteroid to get samples from inside 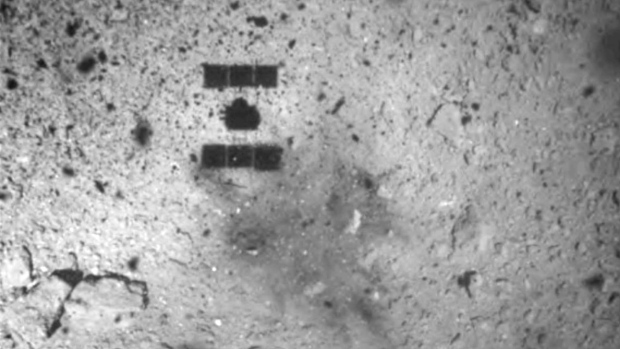 In this Feb. 22, 2019, file photo, this image released by the Japan Aerospace Exploration Agency (JAXA) shows the shadow, center above, of the Hayabusa2 spacecraft after its successful touchdown on the asteroid Ryugu. (JAXA via AP, File)

TOKYO - Japan's space agency says its Hayabusa2 spacecraft will follow up last month's touchdown on a distant asteroid with another risky mission - to drop an explosive to make a crater and collect underground samples to get possible clues to the origin of the solar system.

Hayabusa2 successfully touched down on the boulder-rich asteroid Feb. 22, when it also collected some surface fragments.

The Japan Aerospace Exploration Agency said Monday that Hayabusa2 is to drop a copper impactor on the asteroid April 5 to collect samples from deeper underground. The mission requires an immediate evacuation of the spacecraft so it won't get hit by flying shards from the blast.

The asteroid, named Ryugu after an undersea palace in a Japanese folktale, is about 300 million kilometres (180 million miles) from Earth.