Jeff Bezos says he will give away most of his fortune 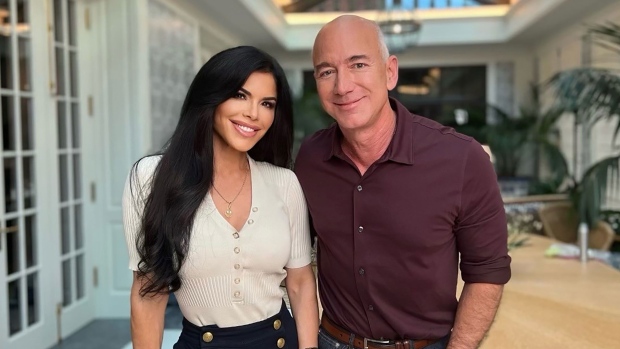 Jeff Bezos and Lauren Sanchez are pictured. Jeff Bezos says he will give most of his money to charity. (CNN)

(CNN) -- Amazon founder Jeff Bezos plans to give away the majority of his $124 billion net worth during his lifetime, telling CNN in an exclusive interview he will devote the bulk of his wealth to fighting climate change and supporting people who can unify humanity in the face of deep social and political divisions.

Though Bezos' vow was light on specifics, this marks the first time he has announced that he plans to give away most of his money. Critics have chided Bezos for not signing the Giving Pledge, a promise by hundreds of the world's richest people to donate the majority of their wealth to charitable causes.

In a sit-down interview with CNN's Chloe Melas on Saturday at his Washington, DC, home, Bezos, speaking alongside his partner, the journalist-turned-philanthropist Lauren Sánchez, said the couple is "building the capacity to be able to give away this money."

Asked directly by CNN whether he intends to donate the majority of his wealth within his lifetime, Bezos said: "Yeah, I do."

Bezos said he and Sánchez agreed to their first interview together since they began dating in 2019 to help shine a spotlight on the Bezos Courage and Civility Award, granted this year to musician Dolly Parton.

The 20-minute exchange with Bezos and Sánchez covered a broad range of topics, from Bezos's views on political dialogue and a possible economic recession to Sánchez's plan to visit outer space with an all-female crew and her reflections on a flourishing business partnership with Bezos.

That working relationship was on display Saturday as Bezos and Sánchez announced a $100 million grant to Parton as part of her Courage and Civility Award. It is the third such award, following similar grants to chef Jose Andrés, who has spent some of the money making meals for Ukrainians — and the climate advocate and CNN contributor Van Jones.

"When you think of Dolly," said Sánchez in the interview, "Look, everyone smiles, right? She is just beaming with light. And all she wants to do is bring light into other people's worlds. And so we couldn't have thought of someone better than to give this award to Dolly, and we know she's going to do amazing things with it."

The throughline connecting the Courage and Civility Award grantees, Bezos said, was their capacity to bring many people together to solve large challenges.

"I just feel honored to be able to be a part of what they're doing for this world," Bezos told CNN.

Unity, Bezos said, is a trait that will be necessary to confront climate change and one that he repeatedly invoked as he blasted politicians and social media for amplifying division.

How to give it away

But the couple's biggest challenge may be figuring out how to distribute Bezos' vast fortune. Bezos declined to identify a specific percentage or to provide concrete details on where it would likely be spent.

Despite being the fourth-wealthiest person in the world, according to the Bloomberg Billionaires Index, Bezos has refrained from setting a target amount to give away in his lifetime.

Bezos has committed $10 billion over 10 years, or about 8% of his current net worth, to the Bezos Earth Fund, which Sánchez co-chairs. Among its priorities are reducing the carbon footprint of construction-grade cement and steel; pushing financial regulators to consider climate-related risks; advancing data and mapping technologies to monitor carbon emissions; and building natural, plant-based carbon sinks on a large scale.

Though Bezos is now Amazon's executive chair and not its CEO — he stepped down from that role in 2021 — he is still involved in the greening of the company. Amazon is one of more than 300 companies that have pledged to reduce their carbon footprint by 2040 according to the principles of the Paris Climate Agreement, Bezos said, though Amazon's footprint grew by 18% in 2021, reflecting a pandemic-driven e-commerce boom. Amazon's reckoning with its own effect on the climate mirrors its outsized impact on everything from debates about unionization to antitrust policy, where the company has attracted an enormous level of scrutiny from regulators, lawmakers, and civil society groups.

Bezos compared his philanthropic strategy to his years-long effort constructing a titanic engine of e-commerce and cloud computing that has made him one of the most powerful people in the world.

"The hard part is figuring out how to do it in a levered way," he said, implying that even as he gives away his billions, he is still looking to maximize his return. "It's not easy. Building Amazon was not easy. It took a lot of hard work, a bunch of very smart teammates, hard-working teammates, and I'm finding — and I think Lauren is finding the same thing — that charity, philanthropy, is very similar."

"There are a bunch of ways that I think you could do ineffective things, too," he added. "So you have to think about it carefully and you have to have brilliant people on the team."

Bezos' methodical approach to giving stands in sharp contrast to that of his ex-wife, the philanthropist MacKenzie Scott, who recently gave away nearly $4 billion to 465 organizations in the span of less than a year.

While Bezos and Sánchez plot out their plans for Bezos' immense wealth, many people of more modest means are bracing for what economists fear may be an extended economic downturn.

Last month, Bezos tweeted a warning to his followers on Twitter, recommending that they "batten down the hatches."

The advice was meant for business owners and consumers alike, Bezos said in the interview, suggesting that individuals should consider putting off buying big ticket items they've been eyeing — or that companies should slow their acquisitions and capital expenditures.

"Take some risk off the table," Bezos said. "Keep some dry powder on hand.... Just a little bit of risk reduction could make the difference for that small business, if we do get into even more serious economic problems. You've got to play the probabilities a little bit."

Many may be feeling the pinch now, he added, but argued that as an optimist he believes the American Dream "is and will be even more attainable in the future" — projecting that within Bezos' lifetime, space travel could become broadly accessible to the public.

Sánchez said the couple make "really great teammates," though she laughed, "We can be kind of boring," Sánchez said. Bezos smiled and replied, "Never boring."

Sánchez, the founder of Black Ops Aviation, the first female-owned and operated aerial film and production company is a trained helicopter pilot. She said in the interview that they've both taken turns in the driver's seat.

Bezos has credited his own journey to space for helping to inspire his push to fight climate change. Now, it is Sánchez's turn.

Sánchez told CNN she anticipates venturing into orbit herself sometime in 2023. And while she did not directly address who will be joining her — quickly ruling out Bezos as a crewmate — she said simply: "It'll be a great group of females."

Bezos may be adding NFL owner to his resume. CNN recently reported that Bezos and Jay-Z are in talks on a potential joint bid on the Washington Commanders.

It is not clear if the two have yet spoken with Dan Snyder and his wife, Tanya, the current owners of the NFL team, about the possibility.

But during the interview on Saturday, Melas asked Bezos if the speculation was true.

"Yes, I've heard that buzz," Bezos said with a smile.

Sánchez chimed in with a laugh, "I do like football. I'm just going to throw that out there for everyone."

Bezos added, "I grew up in Houston, Texas, and I played football growing up as a kid ... and it is my favorite sport ... so we'll just have to wait and see."