Jordan retakes lands leased by Israel in 1994 peace accord 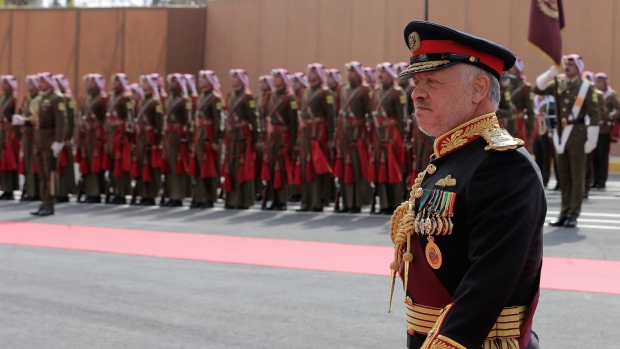 Jordan's King Abdullah II, reviews an honor guard before giving a speech to Parliament in Amman, Jordan, Sunday, Nov. 10, 2019. The king announced "full sovereignty" over two pieces of land leased by Israel, ending a 25-year arrangement spelled out in the countries' landmark peace agreement. King Abdullah II said Sunday that Jordan would end the "annex of the two areas, Ghumar and Al-Baqoura, in the peace treaty and impose our full sovereignty on every inch of them." (AP Photo/Raad Adayleh)

AMMAN, Jordan -- Jordan's king announced Sunday that his country is retaking "full sovereignty" over two pieces of land leased by Israel, reflecting the cool relations between the neighbouring countries as they mark the 25th anniversary of their landmark peace deal.

King Abdullah II had said last year that he wouldn't renew the parts of the 1994 treaty that gave Israel a 25-year lease of the two small areas, Baqura and Ghamr. Even amid mistrust and a looming deadline, Israel was hoping a solution could be found.

But in a speech to parliament, the king appeared to put an end to that.

"Today, I announce the expiration of the Peace Treaty annexes on Ghamr and al-Baqura and the imposition of our full sovereignty over every inch of those lands," he said.

The Israeli and Jordanian foreign ministries announced that Israeli farmers would be allowed to harvest this season's crops in Ghamr, known in Hebrew as Tsofar. They also said that Jordan would respect private land ownership rights at Baqura, or Naharayim in Hebrew.

But Jordan's Foreign Ministry said farmers would require a visa and have to enter through the country through official border crossings, instead of the former system in which they could simply enter the areas freely.

The announcement marked a new blow to relations that, after the treaty, began with great optimism but have steadily deteriorated. Jordan's agreement is only the second peace deal between Israel and an Arab country, following Egypt.

The accord remains a vital strategic asset for both countries, which maintain tight security co-operation and joint economic projects. But Israel's occupation of the West Bank and its policies in east Jerusalem, where Jordan has custodial rights over Muslim holy sites, have repeatedly raised tensions over the years.

In Jordan, where over half the population are believed to be Palestinian refugees or their descendants, public opinion has remained largely against normalized relations with Israel.

Just two weeks ago, Jordan recalled its ambassador to Israel in protest against the detention of two Jordanians for suspected security offences. They were released last week after being held for two months. They were detained while entering the West Bank from Jordan through an Israeli-controlled crossing.

They became part of Jordan after the kingdom gained independence from Britain in 1946.

Baqura, in the northern Jordan Valley, was captured by Israel in 1950 and covers around 200 acres. Ghamr, near the city of Aqaba in southern Jordan, was seized in the 1967 Mideast War and encompasses around 1,000 acres. Neither area is inhabited.

The leases were incorporated into the Oct. 26, 1994, peace deal as symbols of peace and friendship.

Baqura's spot on the Jordan River had made it a popular tourist site for Israelis and included a small park and picnic area as well as an "island of peace" in Jordanian territory that Israelis can visit.

But the site also has a painful history. In 1997, a Jordanian soldier opened fire at an Israeli crowd, killing seven schoolgirls on a class trip.

The late King Hussein visited Israel shortly after the attack to personally apologize to the families of the victims. The king remains a beloved figure in Israel for what was seen as a courageous act.