Jordan to talk to Russia as Syria fighting displaces 270,000 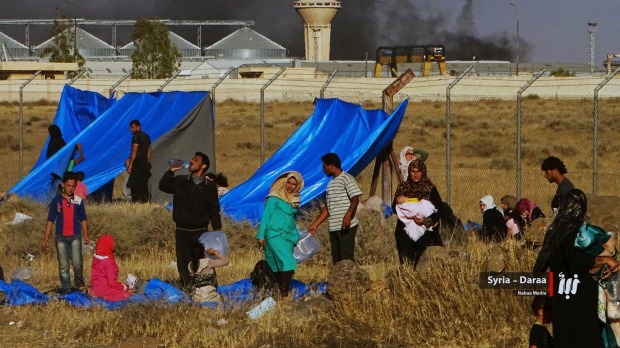 This Saturday, June 30, 2018 photo provided by Nabaa Media, a Syrian opposition media outlet, shows people who fled from Daraa, gathering near the Syria-Jordan border. Jordan's foreign minister said on Monday that he will hold talks with his Russian counterpart over the conflict in Syria, where the latest government offensive in the country's south has displaced 270,000 people, according to a U.N. officia. (Nabaa Media, via AP)

AMMAN, Jordan -- Jordan's foreign minister said on Monday that he will hold talks with his Russian counterpart over the conflict in Syria, where the latest government offensive in the country's south has displaced 270,000 people, according to a U.N. official.

The Jordanian diplomat, Ayman Safadi, said he will head to Moscow on Tuesday and added that he was confident his meeting with Sergey Lavrov would produce more understandings and lead to "more steps forward to contain this crisis and prevent more destruction."

Russia backs a Syrian government offensive in the southern province of Daraa, which has displaced tens of thousands of Syrians, sending most of them toward the closed Jordanian border or the frontier with the Israeli-occupied Golan Heights.

Khetam Malkawi, a spokeswoman for the U.N. agencies in the Jordanian capital of Amman, said the ongoing fighting in Daraa has displaced 270,000 people -- a sharp rise in the displacement numbers since the offensive began on June. 19.

U.N. organizations have sent a convoy of food and medical supplies across the border from Jordan earlier on Monday, she noted.

At the United Nations, U.N. deputy spokesman Farhan Haq said the 270,000 was "the largest displacement" in the Daraa area since the Syrian conflict began in 2011. He stressed that "estimates are subject to change as numbers continue to be verified and front lines shift."

Jordan has maintained the closure of its border, insisting it can no longer endure more influx of refugees. Instead, Safadi said Jordan is delivering aid to the displaced and has deployed field hospitals near the border.

Safadi said Amman keeps open channels with Damascus and Moscow and that his talks with Lavrov will focus on reaching a cease-fire and halting the displacement.

"Our goal is to work on three specific targets," he said. "The first is reaching a cease-fire as soon as possible because this means stopping the Syrian bloodshed and saving Syrians more destruction."

Opposition activists reported more violence in the southern province of Daraa on Tuesday, saying that government forces bombarded towns and villages in the province.

The Britain-based Syrian Observatory for Human Rights said Monday's fighting was concentrated near the villages of Tafas and Nawa. It added that two weeks of fighting have killed 123 civilians.

The Nabaa Media, an opposition activist collective, also said that fighting is taking place in Tafas, adding that thousands of people have fled toward the fence along the frontier with the Israeli-occupied Golan Heights.

Associated Press writers Bassem Mroue in Beirut and Edith M. Lederer at the United Nations contributed to this report.