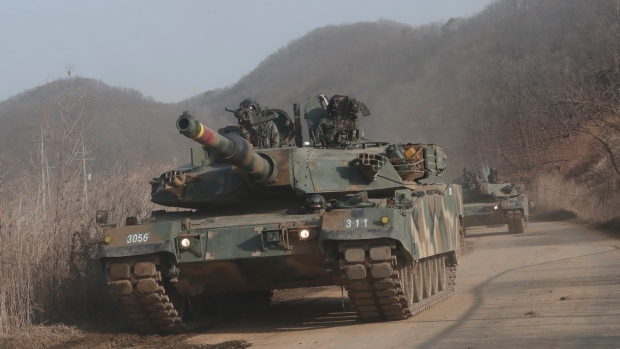 South Korean army's K1A2 tanks move during a military exercise in Paju, South Korea, near the border with North Korea, Wednesday, March 17, 2021. In North Korea's first comments directed at the Biden administration, Kim Jong Un's powerful sister Kim Yo Jong on Tuesday warned the United States to "refrain from causing a stink" if it wants to "sleep in peace" for the next four years. (AP Photo/Ahn Young-joon)

Kim Yo Jong's statement carried by state media targets only South Korea, and this could add credence to a theory that North Korea's decision to restore the communication lines is aimed at pushing Seoul to convince Washington to make concessions while nuclear diplomacy remains deadlocked.

"For some days I have been hearing an unpleasant story that joint military exercises between the South Korean army and the U.S. forces could go ahead as scheduled," Kim Yo Jong said.

"I view this as an undesirable prelude which seriously undermines the will of the top leaders of the North and the South wishing to see a step taken toward restoring mutual trust and which further beclouds the way ahead of the North-South relations," she said.

She added: "Our government and army will closely follow whether the South Korean side stages hostile war exercises in August or makes other bold decision."

Regular drills between Seoul and Washington have been a long-running source of animosities on the Korean Peninsula, with North Korea calling them an invasion rehearsal and responding with missile tests. South Korea and the U.S. have repeatedly said their drills are defensive in nature.

In the past few years, South Korea and the U.S. have canceled or downsized some of their exercises to support diplomatic efforts to end the North Korean nuclear crisis or because of the COVID-19 pandemic. Asked about prospects for next month's summertime drills, Boo Seung-Chan, a spokesman at South Korea's Defense Ministry, told a briefing Thursday that Seoul and Washington were reviewing factors like the pandemic's current status, efforts to achieve denuclearization on the Korean Peninsula and their combined military readiness.

The U.S.-led diplomacy aimed at persuading North Korea to abandon its nuclear program in return for economic and political rewards hasn't made progress since a second summit between Kim Jong Un and then-President Donald Trump broke down because of disputes over U.S.-led sanctions in early 2019.

South Korea's government led by President Moon Jae-in, which wants greater reconciliations between the Koreas, had earlier shuttled between Pyongyang and Washington to arrange the first summit between Trump and Kim.

But North Korea later resumed harsh rhetoric against South Korea, telling it not to meddle in its dealings with the United States. Some experts said Pyongyang shifted the responsibility for the collapse of the second Kim-Trump summit to Seoul and was frustrated with Seoul's failure to break away from Washington and revive stalled joint economic projects held back by the sanctions.