Kurds put down riot by ISIS prisoners in northern Syria 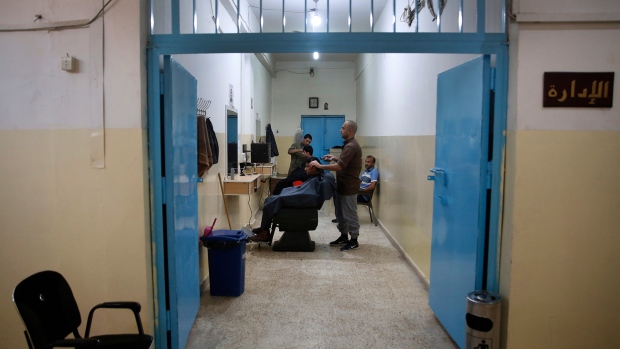 In this April 3, 2018, file photo, prisoners cut the hair of other inmates in the barber shop of a Kurdish-run prison housing former members of the Islamic State group, in Qamishli, north Syria. A spokesman for Kurdish-led forces in northeastern Syria said Monday, March. 30, 2020 they have put an end to riots by Islamic State militants in a prison there. The riots broke out late on Sunday in a prison in the town of Hassakeh and lasted several hours. Kurdish authorities run more than two dozen detention facilities scattered around northeastern Syria, holding about 10,000 IS fighters. (AP Photo/Hussein Malla, File)

BEIRUT -- Kurdish-led forces have successfully put down riots by Islamic State militants in a prison in northeast Syria with none of the prisoners escaping the facility, the top commander of the U.S.-backed forces said.

Mazloum Abdi of the Syrian Democratic Forces tweeted shortly before midnight on Monday that “we were able to avoid catastrophe” in the prison in the northeastern city of Hassakeh.

Kurdish authorities run more than two dozen detention facilities, scattered around northeastern Syria, holding about 10,000 IS fighters. Among the detainees are some 2,000 foreigners, including about 800 Europeans.

Abdi urged that home countries of the foreign fighters find a solution for the prisoners. “Our allies must find a quick radical solution to this international problem,” he said.

The prison riots first broke out Sunday night when former IS members held there began knocking down doors and digging holes in walls between cells. It was one of the most serious uprisings by the prisoners since the Islamic State group's defeat a year ago.

The riots were brought under control on Monday morning but resumed in the afternoon, with gunfire heard inside the prison and ambulances rushing to help the wounded, activists in the area said.

The U.S-led coalition said it assisted the Syrian Kurdish-led forces with aerial surveillance as they quelled the riot.

“Due to great efforts made by our forces & swift intervention against the insubordination of ISIS detainees inside one prison, we were able to avoid catastrophe & take control,” Abdi tweeted in English, using an alternative acronym for the Islamic State group. “No prisoners escaped,” Abdi added, without saying if there were any casualties among the prisoners or the Syrian Kurdish forces.

It was not immediately clear if the riots were triggered by concerns over the spread of the new coronavirus.

Mustafa Bali, a spokesman for the forces, said late Sunday there was no connection between the riot and fears of the fast-spreading virus. There have been no official reports of infection in Kurdish-administered northeastern Syria or in any detention facilities there.

A video posted by activists said to be taken during Sunday's riots, showed two inmates carrying a banner with writing in Arabic that reads: “We call upon the coalition and international organizations that human rights be respected.”

The U.S.-backed Kurdish-led forces declared a military victory against IS in March last year, after seizing control of the last sliver of land the militants had controlled in southeast Syria.

The Hassakeh prison, in the city's southern neighbourhood of Ghoeiran, is believed to house foreign IS militants though the prisoners' nationalities were not immediately known.

The Rojava Information Center said the prison holds about 1,000 low-ranking foreign IS members while Syrian IS members are also housed there, mostly on the building's upper floors.

The families of IS militants and supporters who came out of the last territory controlled by the group are also holed up in camps around the Kurdish-controlled areas in Syria, with the largest one housing nearly 70,000 women and children, many of them foreigners.